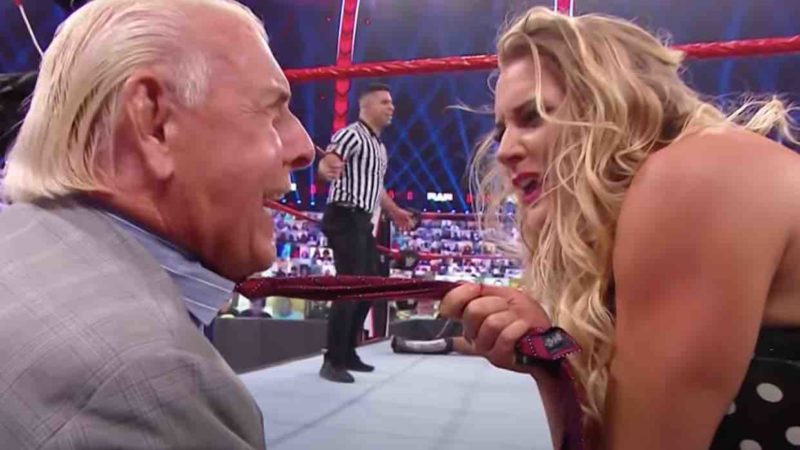 Steamier and hotter than your morning cup of coffee! WWE’s resident ‘Sassy Southern Belle’ Lacey Evans responded in quite the hot way to the daughter of Ric Flair and former WWE RAW Women’s Champion, Charlotte Flair. Charlotte asked in a tweet how fans like their coffee – in which she responded: “venti ice americano extra shot with 3 stevia Hot beverage”. However, Lacey Evans responded in a far more suggestive and risque way by responding back with the following:

“Ric flairicano 1 pump of that sugar.” You can view the full exchange below. Gross, or hot? You decide.

In other news revolving ‘The Nature Boy’, Dave Meltzer discussed WWE’s plans for the 16 time world champion going forward. Meltzer said the following during a recent edition of Wrestling Observer Radio: “Yes, by the way. It’s like whenever they bring Ric Flair back, the first week always does well. That doesn’t mean you bring him back every freaking week. It’s not gonna happen that way, but damn they’re doing it, yeah, he’s doing something with Lacey Evans.”

In addition, Flair has addressed being used as a on-air talent during the age of COVID and his high at-risk status by saying the following during an interview this past Summer: “The WWE is doing everything and following every guideline possible,” Flair said in July. “The testing and all that was conducted as professionally as it could possibly be. Three doctors. Organized. Yes, people had to stand in line, but that was because of so many people being tested. But nobody was together. Everybody had a mask on.”

Flair concluded: “I would scrutinize anybody that said otherwise at the highest level,” he added. “I was tired of hearing the bulls. Carrano, Ace, Vince himself, I could go down the list of people that are making sure that everybody’s life is at the best possible place while they’re there for the event.”