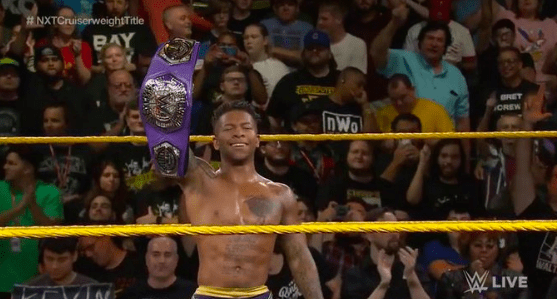 As seen on this week’s episode of Wednesday Night NXT, Lio Rush faced off against Drew Gulak for the Cruiserweight Championship. Rush had defeated Oney Lorcan last week to become the number one contender for the title.

Gulak and Rush put up a great opening match with a constant back and forth of offense. However, ultimately the Man of the Hour delivered a springboard stunner to the champ followed by a phenomenal splash to get the W and the Title.

After the match, William Regal came out to put the title on Rush’s waist but Gulak snatched the title away and handed it to Rush himself. The two men shook hands before leaving the ring.

This is @DrewGulak, we're talking about.

You BEST be getting your feet ON THE GROUND! #WWENXT #NXTCruiserweightTitle pic.twitter.com/5BRBGQWc9W