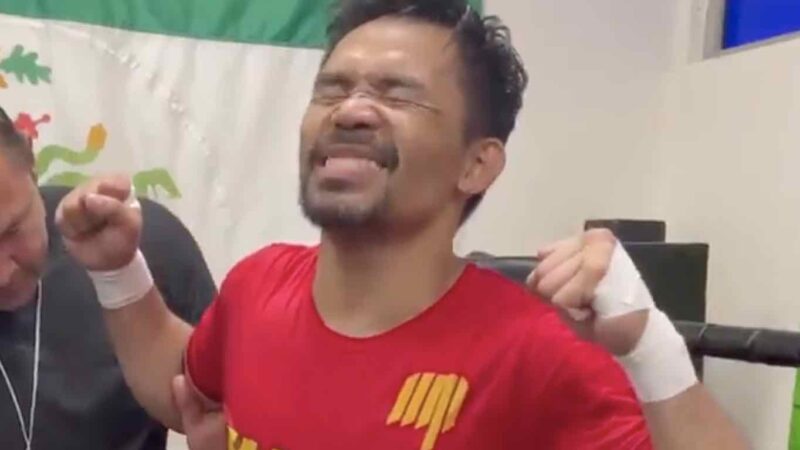 Manny Pacquiao’s wife threw punches in a new sparring video, as seen below. Arch rivals Manny Pacquiao and Floyd Mayweather are seemingly teasing a huge rematch. Pacquiao and Mayweather had competed in a 2015 mega-fight, which the latter won in a comfortable decision. It remains the best-selling boxing match of all time.

The Filipino fighter recently revealed last week that the American “is scared” to fight him.

Manny Pacquiao made some bold comments on Floyd Mayweather

The athletes held separate press conferences on the same day last week, with Mayweather announcing an exhibition in Dubai involving content creator Deji. Global Titans CEO Uday Singh exclusively told Insider on Thursday that his start-up company in the United Arab Emirates will pay Mayweather $30 million for every exhibition he takes part in.

Singh noted that Global Titans is even preparing to take Mayweather to other places in the world for exhibitions, and wants to organize a legitimate fight for real — against Pacquiao or even the UFC megastar Conor McGregor.

Pacquiao himself doubts Mayweather would ever put his iconic 50-0 record on the line in a real bout against him because he’s so “intimidated.”

Speaking via hologram at a media event in Los Angeles, Pacquiao said he doesn’t think a lucrative rematch “will happen” because Mayweather is “scared to death to face me in the ring again.”

“He’s scared,” Pacquiao said. “From the beginning, he’s felt intimidated [by] me and scared to face me.

“It might be possible for an exhibition, but I don’t know yet.”

While Mayweather and Deji take part in an exhibition at the Coca-Cola Arena in Dubai on November 13, Pacquiao prepares for an exhibition of his own, against DK Yoo in South Korea on December 10.