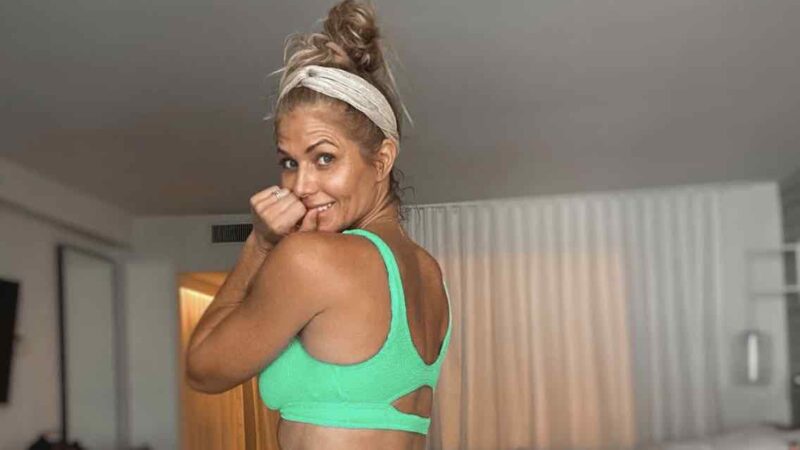 The former WWE star Maryse recently took to her Instagram account and posted some sizzling pictures in an intimate pose with her husband and current WWE star The Miz. She teased the return of the ‘Miz and Mrs.’

While the WWE Hall of Famer Torrie Wilson took to her Instagram account and flaunted her fit figure. She wrote a motivational note in her caption and stated that the inner and outer beauty go hand in hand. Here is what her caption read:

“I will always fight to be the strongest boldest version of me. Honestly, the shy insecure girl hiding in me wants to fight it everyday.
.
Im no dummy. The physical part is much less impressive than the inside job. But in my eyes they also kinda go hand in hand. Feeling strong & confident on the outside impacts the inner world and how we show up in all of our interactions with the world.
.
Fight for your strength & confidence. Don’t lay down to mediocrity & insecurities. You KNOW all it takes to have the life you want is sitting on the other side of all your doubts & self imposed limitations.
.
We are ALL a constant work in progress. Show the world what you are made of. 💪🏽❤️”

WWE stars Titus O’Neil and The Miz will represent their hometown franchises and selections in the upcoming 2022 NFL Draft next week in Las Vegas. The NFL Draft is scheduled to commence on April 28 till April 30, 2022, and the season will kick off on September 8, 2022. There are seven rounds in the draft wherein 32 teams are awarded one pick per round. Over three days, 262 players are selected.

In an official announcement by WWE, Titus O’Neil and The Miz shared their insights on the upcoming NFL draft. The WWE Global Brand Ambassador said he’s honored to represent his hometown team. O’Neil cited his excitement about the NFL draft taking place on his birthday week and said it was the best gift he could receive:

“This opportunity to announce the name of the next great contributor to our community both on and off the field is an honor that I’ll never forget. It’s also the BEST BIRTHDAY GIFT ever as I get to celebrate on my birthday this very special occasion with the NFL, the Bucs, the Tampa Bay community, and the player selected.”