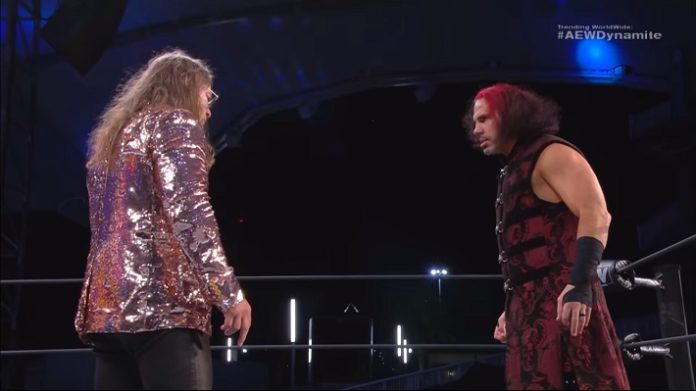 During this week’s episode of AEW Dynamite, Matt Hardy appeared and cut a promo on Chris Jericho. He responded to Jericho’s promo on the previous episode. At the end of Hardy’s promo, he invited Jericho to visit the Hardy Compound for an Elite Deletion. This has certainly gotten fans to talk about a possible match between the two in the classic cinematic style that Hardy is known for.

However, that match is not certain yet. On Wrestling Observer Radio, Dave Meltzer talked about the possible match between Matt Hardy and Chris Jericho. Meltzer repeated that it was only something under consideration and not at all confirmed.

It was not noted why Hardy mentioned the Elite Deletion in the promo. The match has not been filmed and is not a reality yet.

The company has finished taping for several episodes of Dynamite. However, a closed-set taping on Matt Hardy’s North Carolina property would certainly be interesting. We will have to see if they go ahead with the match.