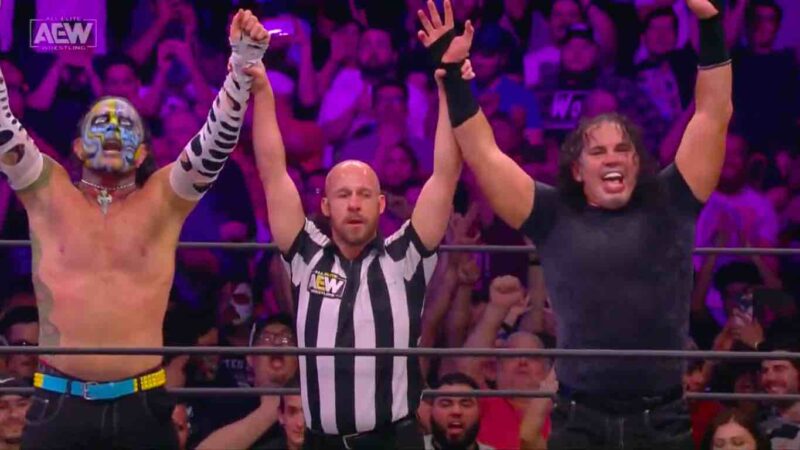 AEW star Jeff Hardy recently grabbed the headlines. ‘The Charismatic Enigma’ was recently arrested for DUI. He has had a history of DUI arrests and his struggles with drugs and alcohol. This matter has been well documented over the years and the nightmare is not over for him. Fans had hoped that he cleaned up, but that is seemingly not the case.

The AEW star was arrested and hit for having a BAC of .294 during his recent arrest. A court date was set up for June 14th after he posted bail on June 13th. As per the reports, Jeff Hardy’s appearance in court has been cancelled. 1st Coast Bail Bonds & Surety handled his $3,500 bond. It turns out he was planning to make his in-ring return from injury before the arrest took place. The video clip of his arrest was also revealed.

Jeff Hardy was booked to team up with Matt Hardy and compete in a ladder match with The Young Bucks and The Jurrassic Express in a Ladder Match for the AEW Tag-Team Championships. However, it seems that the match is up in the air. While speaking to Lucha Libre Online hours before Jeff Hardy’s DUI arrest, Matt Hardy stated that he believed Jeff would be cleared for this week’s triple threat ladder match.

“As long as Jeff clears [is medically cleared], which I think he’s going to clear OK, we really want to go out and tear the house down in this three-way ladder match and become the AEW World Tag Team Champions,” Matt said. “If we do that, we are going to be the first tag team in pro wrestling history to hold the major world tag team titles in four different decades”.

It has been noted that AEW is no longer promoting the match and we will have to see what is next for Jeff Hardy.

It was disheartening to hear the news about my brother yesterday. Recovery isn’t a linear process & I’ll continue doing whatever I can to help my brother be healthy. Being healthy & well is the most important thing for Jeff, his wife, his children & our family at this time.