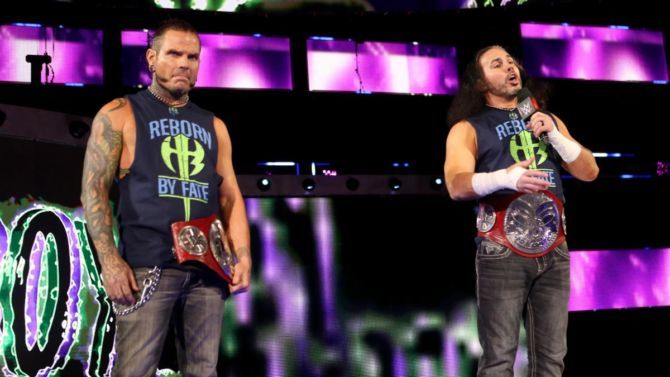 The Usos scored an impressive victory against Breezango during Backlash PPV and retained their tag team championship, though before the PPV Officially began, an interesting statement came out from Matt Hardy.

The former ECW Champion and one-half of the current Raw Tag Team Champions tweeted out that he’ll be monitoring the match between Usos and Breezango:

The Hardys won’t rest until we are The Greatest Tag Team EVAH.

Following this Matt once again made a tweet which showed a glimpse of his ‘Broken’ persona and claimed that their house will look delightful with the SmackDown Tag Team championships:

This twitter exchange has raised many questions in minds of WWE Fans, and people have been speculating what these tweets mean or where it might lead these two teams.

Considering how much control WWE is known to keep on its superstar’s social media accounts, some people believe that this might lead to a cross brand feud between the two teams and they may end up facing each other at SummerSlam.

Though it’s worth noticing that recently WWE has been giving a little more freedom to their stars when it comes to social media. In recent days we have seen Braun Strowman breaking character and posting pics of himself and his surgery from his personal Instagram account after his injury.

So it’s possible that this exchange of tweets might be unscheduled and the two teams may not face off at all in near future. Although since they are in the same company, a  feud between the two teams somewhere down the line can not be completely ruled out