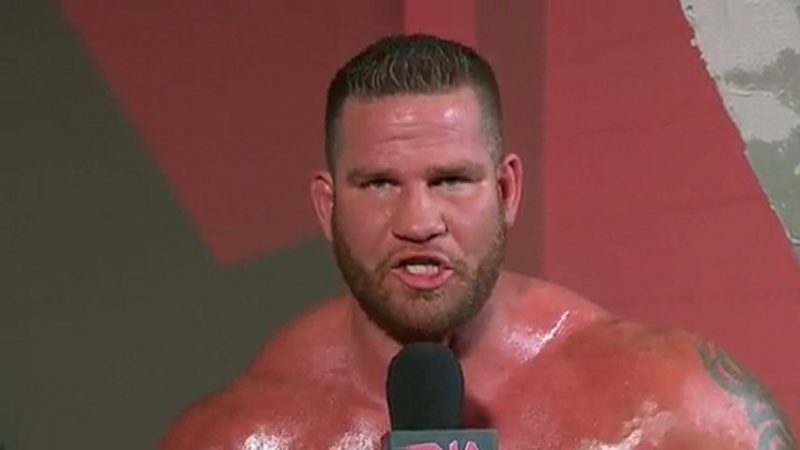 Before Matt Morgan started working in TNA, he spent time in WWE’s developmental territory Ohio Valley Wrestling and on SmackDown during the original brand split.

During the Wrestling Inc. podcast, Matt Morgan and Ryba were asked by a fan about the best backstage prank they saw during their careers.

Matt talked about then time Brock Lesnar tried to tackle The Big Show backstage at a house show event after Survivor Series 2003. He revealed that during the show, JBL goaded Lesnar into tackling Big Show backstage.

“It was the time I was doing the Team Lesnar bit at Survivor Series,” Morgan said. “Survivor Series had come and gone. Nathan Jones, my partner, ends up quitting. So now I’m escorting Brock to the ring as his heater, like he really needs a f–king heater, right. But therein lies the heat.

“Anyways, we’re on a house show doing this, and Big Show had just turned babyface, and we’re on the house show. He wrestles JBL that night, gets done with his match, JBL comes back to the curtain, Big Show is still doing his babyface crap in the ring with the fans, and JBL goes to Brock. He goes, ‘You know, I bet, you son of a b—h, don’t got a hair on your ass that you won’t full on tackle The Big Show when he brings his fat ass back here.’ Sure enough, Big Show comes through the curtain. He’s soaking wet with sweat and he’s breathing heavy from a hard match, he’s not expecting this. Dude, and all of a sudden he was just like, ‘Huh, huh, huh,’ [Lesnar] bulldozes him across the linoleum floor. Form tackles, like a spinebuster, Big Show right on to the linoleum floor. If you could hear and feel this flab hitting the linoleum floor under our feet. You could feel that shaking the ground.”

Morgan said he actually felt bad for the Big show following the incident. He said this kind of prank can affect even the biggest Superstars.

“And I felt terrible because Big Show, and I’m not trying to out the guy here, but he has to mad about this afterwards,” he said. “Like his feelings were legit hurt by this. I felt terrible. It just goes to show you that no matter how big you are, how tough you think you are, enough of this ribbing and whatnot, can screw with you mentally a little bit.”