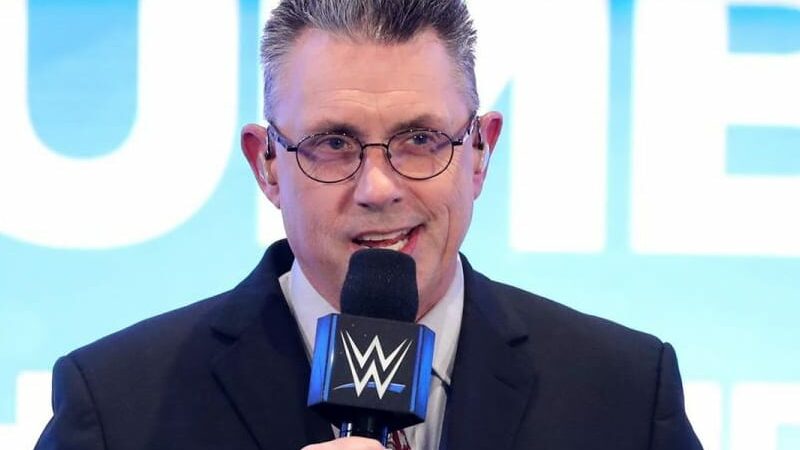 Tonight’s edition of WWE SmackDown has been an edition to remember with Roman Reigns coming face to face with ‘The Prince’ Finn Balor in a contract signing for ‘The Head of the Table’s’ WWE Universal Championship at this year’s WWE SummerSlam pay-per-view event. Michael Cole’s bold message to this AEW star recently leaked.

During the show, WWE’s lead play=by=play announcer Michael Cole mentioned a fired WWE star in Buddy Murphy. Murphy was let go from his WWE contract earlier this year in one of several mass firings.

Cole would bring up Murphy and Seth Rollins against Rey and Dominik Mysterio as it was Dominik’s very first match last year on the program. Dominik’s father, Rey Mysterio defeated ‘Right Hand Man’ Jey Uso in single’s action tonight as Dominik would interfere helping his father to win.

In other news regarding Michael Cole, the top WWE commentator was recently on ‘The Pat McAfee Show’ and told his SmackDown broadcast partner why he believes John Cena is ‘The Greatest of All Time’. Credit to WrestlingNews.co for the below.

Of course the moment at the end (of the Roman Reigns vs Edge match), it was a really emotional moment for me. John and I have been through so much in our career together. We really both broke through at about the same time. I was here a few years prior to John. Many times over the years, people have said Jim Ross had Stone Cold Steve Austin, Michael Cole had John Cena, and it’s true. I believe John is the greatest of all time. I have no doubt in my mind that that man is the greatest sports entertainer because he did it longer than anyone at the level that he was at as a 16 time World Champion. To see the emotion that he had, the smile on his face, and the high-fiving everyone, to see how excited he was to be in that atmosphere, I just reacted like a little boy again.

A top wrestling star ‘exposed’ this bad Michael Cole lie. Cole continued: I was Sean Coulthard, not Michael Cole, who was watching this product as a 10 year old kid and marking out for Hulk Hogan, Bob Backlund, and those guys. That’s who I was again. The reaction was legitimate. I think that’s why you and I work Pat. It’s real. Nothing is rehearsed. It’s just you and I being two cool guys hanging out. That Cena stuff, I’ll tell you, I’ve been in cars and buses with John Cena for a decade. That man is the salt of the earth. I’ve learned so much about this business from him. To see him come back like that, it was a legitimate mark out moment for me. It really was, and I don’t have many of those in my career anymore, but that really was one.”