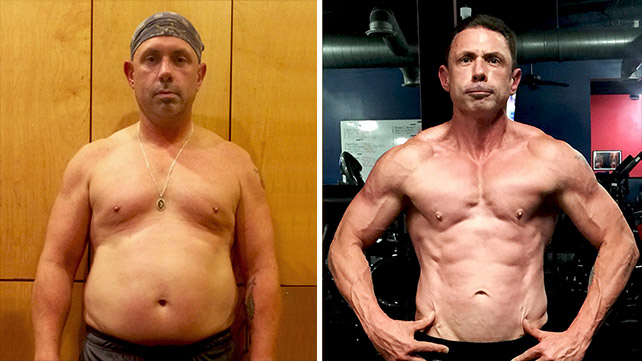 Longtime WWE commentator Michael Cole recently spoke with WWE.com about his amazing weight loss and how he did it. By looking at the photos above, it’s been a big transition for him. Here are the highlights.

Exactly how much weight have you lost as of today?

I started at 226 pounds with 29.9 percent body fat and as of today, 11 months later, I weigh 169 pounds with 6.5 percent body fat. I was down 65 pounds, but I’ve put on a little weight because we changed my diet and added some calories. I feel better now at 48 years old than I did at 21 years old.

How did you go about losing so much weight?

I was eating a lot of carbs; a bagel for breakfast, a sandwich on a hard roll with potato chips for lunch and at dinner, I’d eat potatoes with whatever else I was eating. Another big thing for me was that I enjoyed drinking beer. I was a big beer drinker and those are very empty calories. I haven’t had a drink since we started this program almost a year ago. Jesse’s program really isn’t dieting. It’s increasing meals to eating six times a day every three hours and three of those meals are protein shakes. The other three meals are something like a chicken breast, a green vegetable and rice or yams for carbohydrates. Sometimes, I’ll eat egg whites and turkey bacon. We just wanted to make sure that I ate six times a day to jump start my metabolism. You have to eat to lose weight. We then slowly cut down my carbs and recently depleted all carbs for the pictures in this article.

After the first month, I was 10 pounds down. After the second month, I was down another 10 pounds. As I saw the progress and saw my body change, I really got into the program. Jesse started tweaking my diet, increasing my cardio, which is ow 90 minutes on the Stair Master every day, and changing my weight training to the point where this has become part of my daily life whether I’m with Jesse at home or on the road.

I’m an obsessive compulsive in many ways and when I set my mind to something, I don’t stop until the job is done. Now that I’ve reached my goal, I don’t want to stop. We’re going to keep at this for years to come so I can keep the weight off, put on some muscle and have fun doing it.