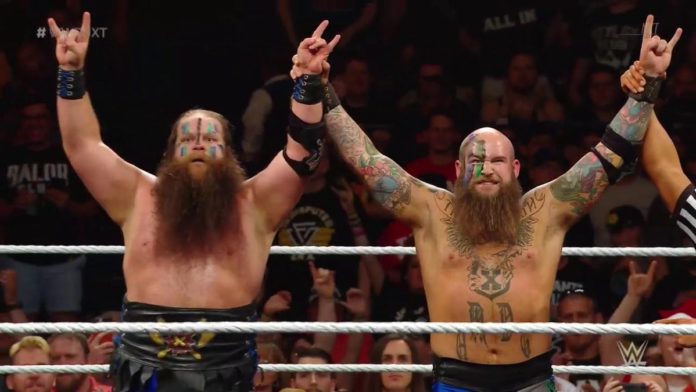 On Monday Night Raw, the WWE Universe was both elated and aggravated over the main roster debut of the NXT Tag Team Champions. Since joining the NXT roster back in 2018, fans wondered when the War Raiders would show up on Monday or Tuesday nights. However, nobody expected to see their name changed again, this time to the Viking Experience.

It didn’t take long for those watching to voice their displeasure with the change of both the tag team and individual names (Hanson now being called Ivar, and Rowe going by Erik) causing a certain legend to come to their defense.

So maybe #VikingExperience wouldn’t have been my first choice, BUT, had there been social media in 1996, I’m guessing the name #Mankind would not have been greeted with much happiness either. Enjoy this match with Fergal ….um, Finn Balor.

Names can be tweaked, if the talent is there to back it up – which in this case, it is. Does the name “Kane the Undertaker” ring any bells?

Foley debated with fans throughout the night. Eventually, Road Dogg joined in the discussion, siding with Foley, saying Viking Experience will be more recognized than War Machine ever was.

Foley took to Facebook the next day to discuss the name change again, hoping that fans had calmed down.

Sure it’s a bad name – but it got people talking! Plus, these two guys are talented enough to weather the storm. I put out a little tweet, just being happy that two hard-working guys had made their debut on Raw – and you would have thought I just praased John Cena with the heat I got for it! My guess is that anything with the word “war” in it is not going to go down well with USA Network or current and potential sponsors.

Regardless of how fans may feel, it looks like Erik, Ivar, and the Viking Experience are here to stay. Aside from the name, the duo looked as dominant as always on Raw, and are hopefully on their way to a great run at the top of the division this year.

Is Foley’s outlook the best to take? Should those that followed the former War Machine to NXT and WWE just be happy that they’ve made it to the main roster of the company? Let us know in the comments below.