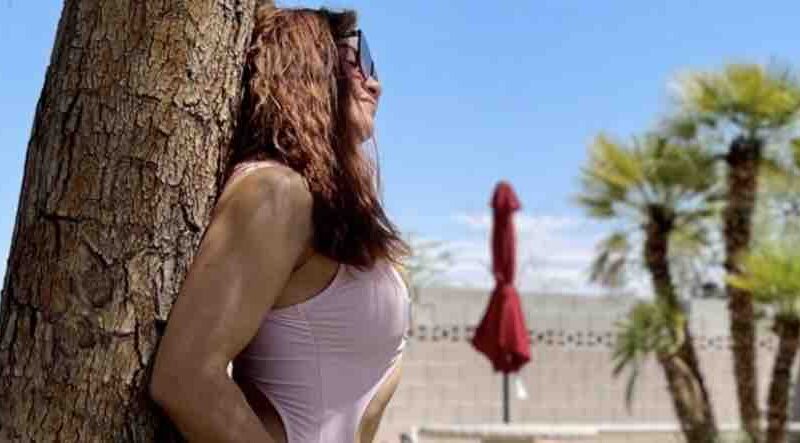 The former UFC Women’s Bantamweight Champion Miesha Tate recently took to her Instagram account and posted a picture wearing a swimsuit, showing she is getting her beautiful large backside back. Here is what she wrote in the caption:

Tate made her 125-pound debut earlier this month, taking on No. 6-ranked flyweight Lauren Murphy at UFC Long Island. The match did not pan out as planned for Tate. The former bantamweight champion was thoroughly outclassed, losing a wide unanimous decision to Murphy. The loss is Tate’s second in a row but despite the current skid, “Cupcake” remains in great spirits and says she’s not considering retirement at the moment.

“I’m in a very great point in my life,” Tate said on Unlocking the Cage with Jimmy Smith on SiriusXM Radio. “Not like Chapter 1. Chapter 1 was kind of toxic and I was in a lot of turmoil and that was my outlet and it was also my identity. It’s none of those things for me anymore. So as I continue to evolve, life is great. It’s very kush. I live a wonderful life. I have everything that I need. I don’t need to fight, I just want to. And I want to do better than I did this time. I’m not going to give up on it, but this is a whole new challenge. I just need to get my mindset a little bit more gritty, a little bit more grind. A little bit more ‘gotta have it,’ not just there to have fun, and I don’t feel like I hit the nail on the head with that this time.”

Tate had decided to make the cut down to flyweight. But with one fight at 125 now under her belt, the former UFC champion is reconsidering that choice.

“I definitely need to take some time to figure it out,” Tate said. “It was a really long camp, it got drawn out two times. I don’t know if I’m going to stay at 125 or just go back to 135 where I can enjoy [my life]. That diet, for that long, made me want to blow my brains out. It was terrible. So I think I might stay at 135. I don’t know. We’ll see. I need a little time to regroup and see where I go from it.”

We will see what the future holds for her.