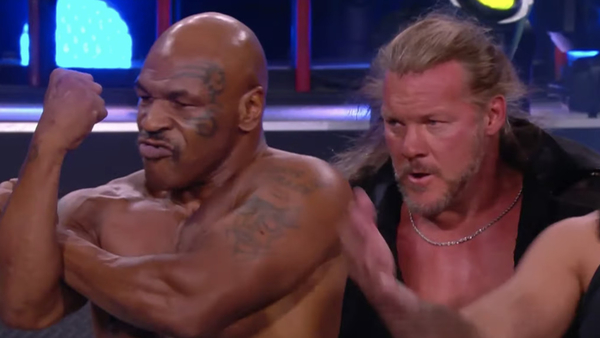 Boxing icon ‘Iron’ Mike Tyson opened up tonight’s edition of AEW Dynamite where he states he is happy to be tonight’s special guest ringside enforcer for the matchup against Chris Jericho vs Dax Harwood. However, MJF shows up and states that Chris Jericho is the enemy of Tyson and offers the former heavyweight champion a blank check to take out the first ever AEW World Champion. In response, Tyson would rip up the check. However, this would take two attempts as ‘Iron’ Mike would flub the first try. Mike Tyson was spotted with this top AEW female star.

In other news regarding Mike Tyson, the boxing great discussed why he forgave his long-time rival Chris Jericho during a recent edition of Road to AEW Dynamite. Credit to Cageside Seats for the below.

“Man, it was so… I felt like a 14-year-old boy, man. I was so excited, so enthusiastic, man. I couldn’t wait to get my hands on someone.

I was child champion. I was heavyweight champion at 20 years old. I unified the championship at 21 years old. I had eleven title defenses. I went all over the world. I’m champion forever. I’m a Hall of Famer in wrestling and boxing. I’m invincible.

You know, of course, everybody knows in the wrestling world I have a long relationship with Mr. Chris Jericho. And, what’s the use of making enemies with someone you knew so long.

I’m the enforcer for the Chris Jericho/Dax Harwood match, and I’m making sure that nothing funny is going on.”

What does @MikeTyson think of @The_MJF's money? Here's your answer #AEWDynamite pic.twitter.com/zCePAeSKcr