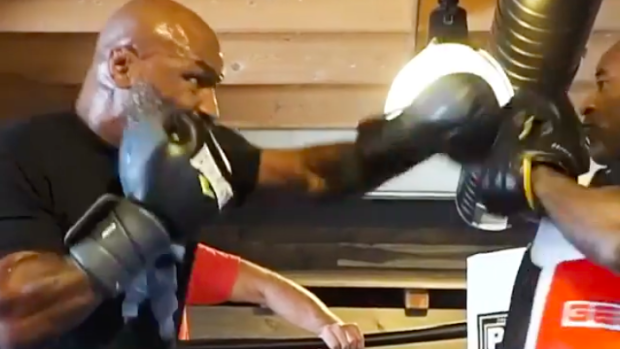 Mike Tyson is a legend in the boxing industry. The legend has made his name by being one of those that was short heightened but never walked away from a fight. He never backed down from any challenge that was thrown at him and it goes on to show why he is loved beyond his own sport.

AEW and WWE honoured him in their own way and ‘Iron’ Mike Tyson honours friendships. The Baddest Man on the Planet knows the difference between picking a fight and getting involved in one. He knows that his punch can still knock someone off their feet.

Mike never stops from doing what he does best and that’s Boxing or helping people. While his age doesn’t allow him to be in that activity state, he did amazing things back in the day. In a recent episode of ‘HotBoxin’, Tyson’s old friend Fat Joe recalled Tyson’s approach and how his presence alone took people off their feet.

It just so happened that Tyson’s friends Joe and Pun met some bouncers in Jersey. They wanted Pun to take off his shoes, and Pun has had a problem with shoes in the past. He respectfully declined, but they insisted, and with eight of them in one place, running away was never an option.

When they were about to attack the two, a voice came from the back and that was enough to take those bouncers off their feet and back away before they got themselves checked by a medical practitioner. The voice said:

The eight knew that just one man was enough to knock their teeth out and they ran away saving themselves from a doomsday. Joe later said:

Mike Tyson is a certified legend in his field, but his recent health issues gave the fans some worrisome moments.

Are you concerned about his health too? Sound off in the comments.