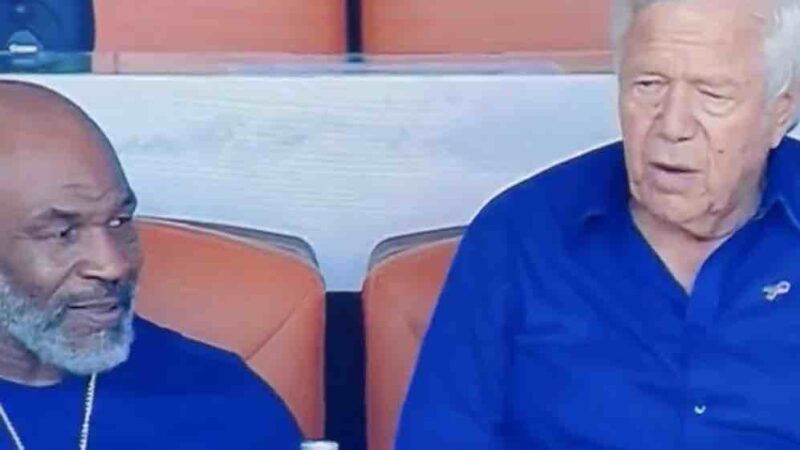 Mike Tyson is one of the legendary pro boxers the sport has ever seen. The New England Patriots were in South Florida to take on the Miami Dolphins and Robert Kraft made the trip with them. He was spotted in a box alongside a special guest, none other than ‘Iron Mike’. The Dolphins ran out 20-7 winners, with quarterback Tua Tagovailoa starring.

It was noted that ‘Iron Mike’ was hanging with the Pats owner (who may or may not be sitting on top of a stack of phone books) chatting and sharing a spectacularly awkward series of fist bumps. Kraft went with the hand pat and Tyson countered with the initial fist-bump which clearly caught Kraft off-guard.

Then it just turned into a mess of hands mashing together every which way. From a handshake/fist-bump perspective, it was a disaster, but in fairness, they didn’t realize they were being broadcast to millions as the fans scratched their head.

The image was soon all over Twitter, and sure enough, NFL fans didn’t really know what to make of it: “Mike Tyson and Robert Kraft holding hands…for some reason,” wrote reporter Dov Kleiman.

“If Mike Tyson wants to hold hands, you hold hands. Are you going to tell him no?” joked @JayEsEn87, while @beeweb67 jibed: “Was this supposed to inspire toughness from his team?”

Tyson has been making some public appearances recently. He was spotted in public this week while out in New York City. But, the sights had raised concerns for the fans as he needed a cane to get around. ‘Iron Mike’ has reportedly been dealing with a “sciatica flare-up” in his back. He was recently pictured in a wheelchair at Miami International Airport on Tuesday. Tyson’s latest outing when he was assisted in a wheelchair by an airport employee came exactly three weeks after he was seen moving gingerly while out in New York City.