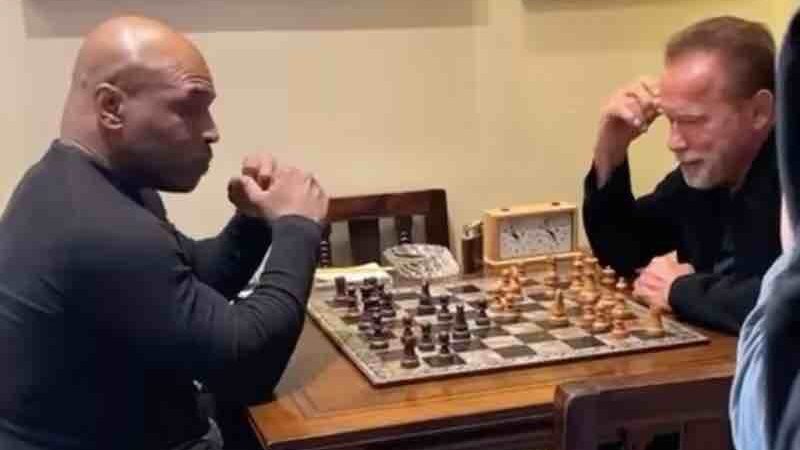 Arnold Schwarzenegger and Sylvester Stallone were at the top of their careers and dominated Hollywood back in the 80s. Schwarzenegger gained fame for his role in ‘The Terminator’ while Stallone’s ‘Rocky’ turned him into a superstar. The two heroes defined the action-movie culture during the decade and left an everlasting impact on the fans.

It has been noted that the duo shared a bitter relationship as the 7-time Mr. Olympia previously had an affair with Stallone’s ex-wife Brigitte Nielsen. Many fans always wanted to know who would win in a fight between these two icons.

Boxing legend Mike Tyson had an answer to this question as he gave The Terminator a reality check. In an interview with ‘Access Daily’ Tyson was asked to play a game called ‘Celebrity fight Club’. The game pitted fellow celebrities against each other, with Iron Mike choosing the winner. Eventually, the host then pitted Stallone and Schwarzenegger and asked Tyson to pick the winner. The boxing legend picked Stallone, claiming that he had actual experience in boxing.

“Now Rocky um Stallone really fought people before, he really actually boxes. I don’t know if Arnold actually fought before but that should be an interesting match.” said Tyson.

It is needless to mention that Schwarzenegger would certainly be the bigger man, Tyson felt that he had little chance because he hadn’t been in a fight before, unlike Rocky.

Speaking about the affair, Nielsen was a co-star in his film Red Sonja. The two developed a romantic relationship during their time together and started an affair on the movie sets as they were dating different people. At the time, Schwarzenegger was dating his future wife Maria Shriver.

During the affair, Schwarzenegger realized he wanted to marry Shriver and ended his affair with Nielsen. The Terminator and his wife would then go on to have six children. However, the couple called it quits in 2011 after Shriver found out about another affair between Schwarzenegger and their housekeeper.