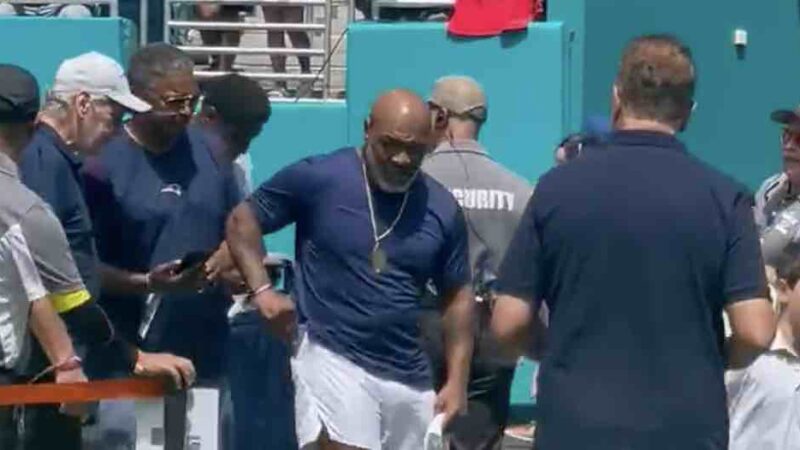 The legendary pro boxer Mike Tyson has been involved in several bouts in his illustrious career. It is needless to mention that his body is going through wear and tear. Tyson has been making some public appearances recently. He was spotted in public this week while out in New York City. But, the sights had raised concerns for the fans as he needed a cane to get around. ‘Iron Mike’ has reportedly been dealing with a “sciatica flare-up” in his back.

He was recently pictured in a wheelchair at Miami International Airport on Tuesday. Tyson’s latest outing when he was assisted in a wheelchair by an airport employee came exactly three weeks after he was seen moving gingerly while out in New York City. Recently, fans have shown concern for Tyson after he appeared at a Miami Dolphins game on Sunday.

Mike Tyson was seen yesterday without a wheelchair and was walking around at the Miami Dolphins’ win over the New England Patriots. However, the former champion was clearly walking slower, and fans took notice of that.

Fans swarmed Twitter to state that they were concerned about how slow he was in a video clip, and even stated that it looked like he was wearing “cement shoes”. Others decided to be internet trolls and mock him.

Another wrote: “How come he struggling to walk?”

Another fan wrote, “Tell him I said to stop skipping leg day.”

One of them wrote: “Too many whacks to the head and sniffing the white stuff hasn’t helped with his mobility”

Mike's back is messed big time for real. This has been a persistent problem for him since he hurt his back doing sit-ups in fight camp years ago. Seems it has progressively gotten worse. Poor man. All the best @MikeTyson.