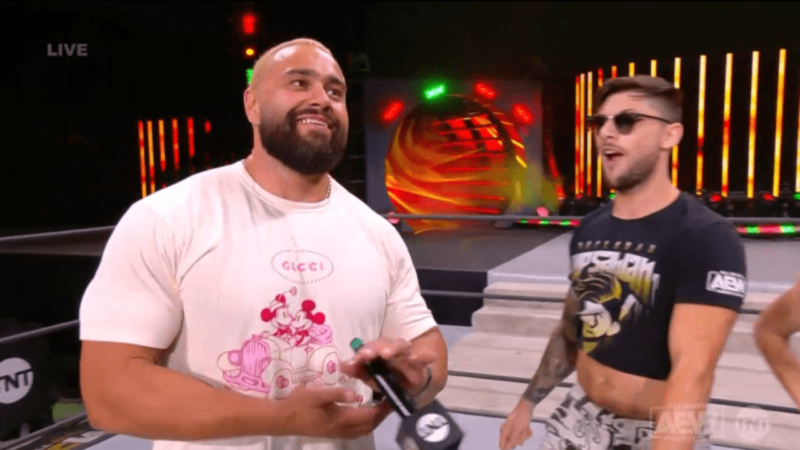 On AEW Dynamite last week, Miro was revealed as Kip Sabian’s best man for his wedding. Well, not just a best man. Miro is The Best Man. When the former United States Champion had a chance to speak, he cut a short yet scathing promo.

Miro said that, when it comes to trying to grab the brass ring, his old boss could shove it up his a**. Now, Miro will look to make his name and breakthrough with WWE’s competition.

On Busted Open Radio today, Miro spoke with Dave Lagreca, Bully Ray, and Mark Henry about his move to AEW and his time on Twitch. When asked about the “brass ring” promo, Miro said.

“You get feelings over the years, and I’ve always been – if you watch my Miro Twitch, I’m always very positive. But there are just certain times when you put all your heart and soul into certain things and you don’t feel like it’s coming to fruition because of one reason or another.”

Miro went on to say that he vented his frustrations to Chris Jericho, who egged him on to do that promo. Not surprising that the Demo God would want to push a few buttons.

“I went and saw Chris before that. Because Chris – who’s better at promos than Chris Jericho? I told him kinda my idea. He’s like, ‘Oh, you should say it.’ I’m like, ‘Whoa. Do I ask for permission? Do I ask for forgiveness after?’

He was like, ‘No, dude you don’t have to ask for anything you just go ahead and do it. It’s a good promo.'”

With that off his chest, he said that he’s ready to move on and focus on his future with AEW. He’s harboring no ill will towards WWE and is ready to see what lies ahead.