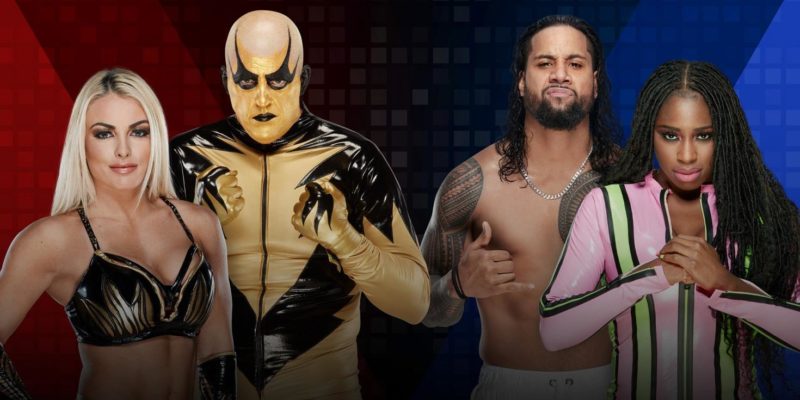 This week’s episode of Mixed Match Challenge, exclusively on Facebook Watch, pitted the team of Rose Gold (Goldust and Mandy Rose) against Jimmy Uso and Naomi.

Before the match began, fans were allowed to vote on the special guest referee, choosing between the two general managers, Kurt Angle and Daniel Bryan. It was revealed that Bryan won by 62%, and the leader of the Yes Movement came down to the ring.

The match began with Jimmy getting Goldust and Daniel Bryan to dance with him, before trying to start out at a quick pace. Goldust immediately put a stop to that, however, telling the tag champion that he’s too old to keep up with Jimmy. Uso and Goldust continue to try to one-up each other in an odd way. Goldust kisses Mandy Rose’s hand, and Jimmy kisses Naomi’s. Goldust hugs Mandy, and Jimmy hugs Naomi. However, Jimmy gives Naomi a kiss, thinking that he’d won. Mandy, though, seemed to be okay with the idea and went to give Goldust a kiss after Jimmy talked him into it. Before the two could lock lips, sadly, Jimmy tried to pin Goldust with a schoolboy. Daniel Bryan refused to count the pin and started a no chant out of anger at Jimmy.

The rest of the match becomes more of a normal tag team match. Mandy Rose takes it over, slamming Naomi with a facebuster and keeping her away from Jimmy until she slaps him. At that point, Naomi clotheslines Mandy and tags in her husband, who lights up Goldust with a few uppercuts and a Samoan drop, before hitting him with the running corner hip attack.

Goldust and Jimmy go back and forth until Goldust catches him with a Cross Rhodes, but Naomi breaks up the pin. Jimmy and Naomi pick up the win after a superkick-Rear View-Samoan Splash combo, ending the match in ten minutes. Before they can celebrate, Rusev and Lana come out, stating that they’ll crush Bayley and Elias next week and prove that they’re the strongest married couple in WWE.