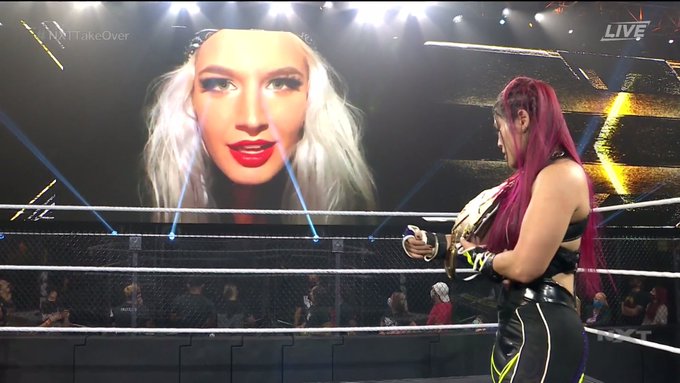 Fans of NXT knew that going into TakeOver, we’d be getting a surprise return to the brand. A former champion was looking to “take back” what belonged to them. Rumors swirled around the WWE Universe, with Bo Dallas, Ember Moon, Bobby Roode, and even Samoa Joe among the possible names.

After the NXT Women’s Championship, Io Shirai was celebrating in the ring when she was interrupted by former NXT UK Women’s Champion Toni Storm. She congratulated Shirai from the screen in the Capitol Wrestling Center and revealed that she’d officially be a part of the brand going forward.

As if that wasn’t enough of a shot in the arm to their women’s division, another surprise was left. The “Mystery Superstar” drove up to the building and emerged on the stage wearing a motorcycle helmet. It was taken off, revealing them to be none other than Ember Moon.

The former NXT Women’s Champion had hinted that her career was up in the air on WWE Backstage back in November. Thankfully, it seems that the Shenom is back, and she’s got eyes on the prize held by the Genius of the Sky.