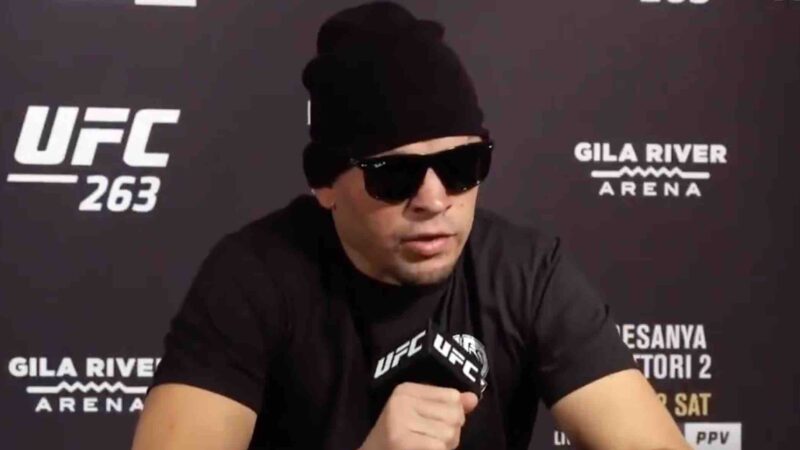 UFC star Nate Diaz had the last fight on his UFC contract and many believed his time has come to depart the promotion. UFC President Dana White himself confirmed it back in October, while also shutting down a potential matchup against Tony Ferguson for Diaz’s last fight. But that is not the case. Dana White had previously made some bold claims about Diaz’s drug test.

As it seems, the younger Diaz brother will be sticking around for a while, at least according to MMA insider Ariel Helwani. In his recent Substack post, Helwani also stated that the UFC isn’t trying to put on a potential bout between Diaz and undefeated rising star Khamzat Chimaev anymore, but used it as an excuse to extend his contract.

“Sounds like the UFC is moving on from Khamzat Chimaev vs. Nathan Diaz fight and, as a result, have extended Diaz’s contract. I think they knew that would happen and were hoping to buy time for when Conor McGregor is ready to return later this year. Diaz hasn’t signed any new deal yet, so that, too, is a fascinating story to watch next year.” Helwani wrote.

UFC heavyweight champion Francis Ngannou also recently lambasted the promotion after they similarly “forced” to keep extending his contract. One of the alleged tactics revealed in the antitrust suit was the exploitation of tolling provisions by the UFC in order to compel fighters into resigning with the promotion.

The 36-year-old Diaz (20-13) rose to further mainstream superstardom after his UFC 196 win over Conor McGregor in 2016. He’s currently on a two-fight losing streak after his UFC 263 defeat to Leon Edwards in June, but remains to be one of the more popular draws in the sport. We will have to see how this contract situation pans out moving forward.