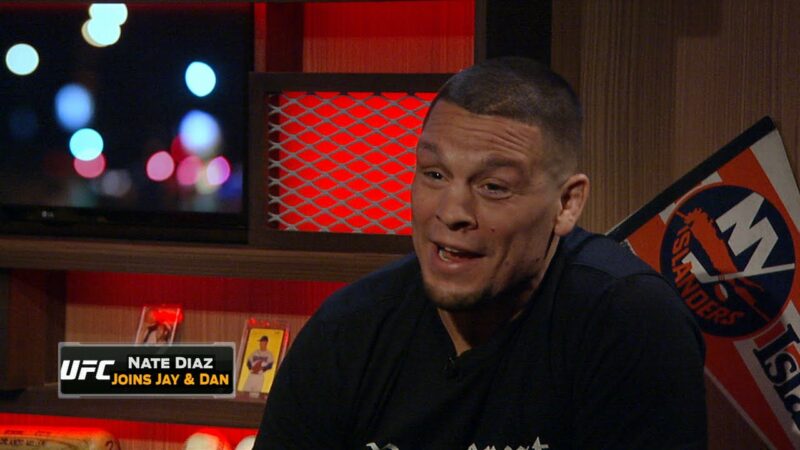 At UFC 281, Nate Diaz met with “Rocky Balboa” Sylvester Stallone, Sly’s wife and his daughter. Nate greeted Sly and his wife Jennifer in a video below.

As MMAfighting.com reported, Dustin Poirier has spent a tenured career in hot pursuit of money, and capturing world titles. These are just two of the reasons the fighter got into the world of combat sports. According to reports, it is safe to say that Poirer has never been too focused on a single opponent. Although, news has boiled to the surface recently that there is one opponent he clearly wants to face, but that seems highly unlikely will ever happen.

Following news that his match against Nate Diaz was scrapped way back in 2018, Poirier continued to pursue the fight. Despite all efforts, the bout was never made reality. Too bad – it would have been a great pay day, win or lose. The press alone would have paid off the mortgage, the cars, the debts, and solidified a Netflix movie… Well, perhaps.

Today, Diaz seems poised to leave the UFC and become a free agent after his contract ends soon. Obviously this now casts doubt that he’ll ever compete in the promotion again, much less see Poirier standing across the cage.

Poirier admits that he wishes the Diaz fight had happened before his exit from UFC.

“I’ve always wanted to fight Nate,” Poirier said during UFC 280 media day. “We tried to make it happen a few times. It always fell apart. It sucks that he’s gone now, and I won’t get that chance to fight him. But it is what it is, the sport moves on.”

These days, McGregor has bulked up while filming his role in the upcoming Road House reboot. There have been no signals about when he may compete again. McGregor has also been removed from the UFC’s anti-doping program, which means he’ll have to complete six months of drug testing before he can book a fight. Surely he’ll have to wait longer after shooting the movie as with most movie bulk-ups, doing it naturally is not the order of things.

“I’m not sure,” Poirier said about fighting McGregor again. “You never know in this sport. I don’t know if he’s coming back, what weight class, I’m not sure. Never say never but it’s not looking like it in the near future. We’ll see. I fought him three times. I’m trying to get to the title.”

Poirier made it very clear that his only focus is his upcoming fight against Michael Chandler in a featured bout at UFC 281 on Saturday night. If he is victorious, the 33-year-old lightweight hopes that the victory will put him back in the race to become champion again.