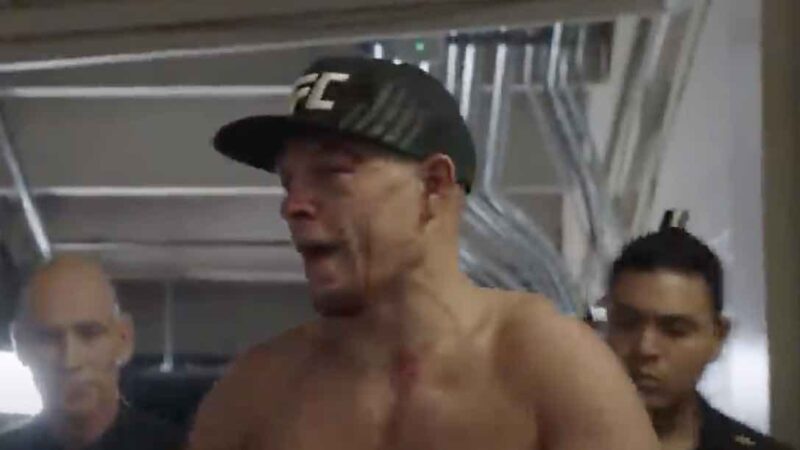 Nate Diaz has responded to Jorge Masvidal allegedly knocking out one of Colby Covington’s teeth in a Miami fight outside of a restaurant, which led to police being called. He called a supporter of Colby’s a ‘big ole pu**y.’ Colby also reportedly suffered a wrist injury.


Ur a big ol pusssy

The former UFC star Paige VanZant recently made a pro-wrestling cross-over from the world of MMA. She has admitted that she is not done with the sport of mixed martial arts. She recently signed a deal with All Elite Wrestling(AEW) but she is not ruling out a return to mixed martial arts. VanZant’s last UFC fight took place during UFC 251 on July 12th, 2020 where she lost in the first round via an armbar submission to Amanda Ribas. The event was held in Abu Dhabi, United Arab Emirates.

Paige VanZant talks about her future

Before joining AEW, VanZant was signed to Bare Knuckle Fighting Championship (BKFC). as she had inked a four-bout contract to fight in The deal was reportedly over $1 million. In her BKFC debut, VanZant lost to Britain Hart and suffered a second straight loss to Rachael Ostovich in her next bout.

She recently spoke with TMZ Sports in a recent interview and she stated she is leaving her options open. The former UFC star also claimed that she received some big offers that the UFC couldn’t match financially. VanZant said:

“I’m leaving it open, I’m only 27 so… but I got some really big offers that the UFC just wouldn’t match.”

While speaking in a recent interview with Carton and Roberts on WFAN, Paige VanZant stated that just because she is signed to AEW doesn’t mean she is done with the sport of mixed martial arts. VanZant isn’t retired from MMA, but she is focusing on professional wrestling at the moment.

“I’m not done MMA fighting at all. I think people have this idea that you have to stick with one thing, but being a mixed martial artist, and being in this sport, you can evolve and can focus on one aspect at any given time. Not retired from MMA, but at this current moment, I am signed to [professional wrestling].”

We will see what the future awaits for her.