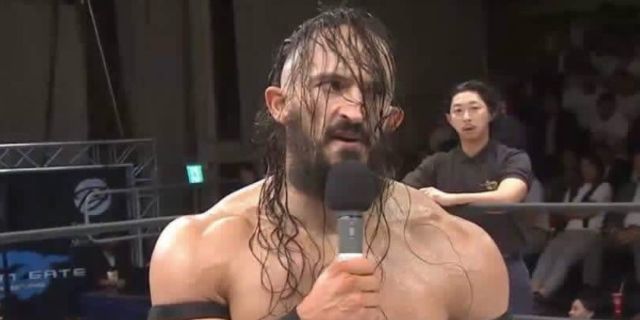 PAC, formerly WWE’s Neville, returned to Dragon Gate on October 2, joining the R.E.D. stable. In his return match to the promotion, he defeated Shingo Takagi.

It’s not shocking to see many performers revert back to older names like PAC has. Whether it be legal issues with copyrights or just wanting to distance themselves from the company, it’s common practice. However, the Man Gravity Forgot took it a step further, renaming his patented Red Arrow finisher.

On Twitter, it was revealed that PAC’s iconic 360 Shooting Star Press would be dubbed the Black Arrow.

Interestingly enough, PAC’s first opponent in his latest run with Dragon Gate has opted not to re-sign with the company. Shingo Takagi issued a statement regarding his status, which was distributed by Dragon Gate’s Facebook page. It was mentioned that he’d still like to work with Dragon Gate, albeit as a freelancer.

I’ve decided to depart from Dragon Gate to compete as a freelancer. I’ve yearned for the freedom to fight with other wrestlers outside both inside Japan and out. Several years ago I discussed this with the company, but under the old regime that was in place until April of this year I was unable to achieve that dream. I brought the subject up to the new regime after Kobe World Hall in July.

With respect for my opinion, the decision was made for me to become a freelancer at the end of my contract term. I’d like to thank Mr. Kido and the Dragon Gate wrestlers who put up with my selfishness from the bottom of my heart.
October 7th in Hakata Star Lanes will be my final day as a Dragon Gate wrestler. My debut match was also in Hakata in October. It feels like fate.

Even as a freelancer, I still plan on returning to the Dragon Gate ring if the opportunity arises. There are a lot of promising rookies that I’m looking forward to battling with in the future.

I will remain a member of Antias until their reformation on September 24th. I will compete unaffiliated for the remainder of my contract after that date. This will give the fans an opportunity to see some matches they have been eager and excited to see.

I’m going to fight to the best of my ability to show my thanks to the fans in this last month as a Dragon Gate affiliated wrestler.

Thank you and I look forward to your support for both myself and for Dragon Gate.