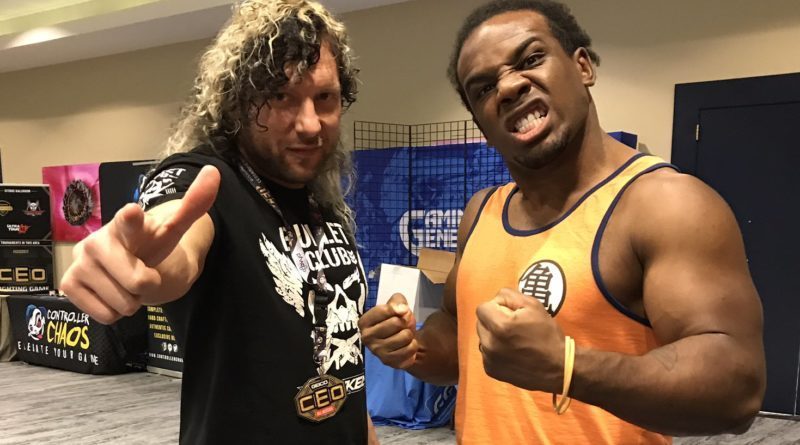 On June 14th, Xavier Woods and the New Day took on Kenny Omega and the Elite in a 3-on-3 matchup in Street Fighter V. Woods and Omega have been building to this moment for three years, going back and forth on Twitter and taking each other on in exhibition matches before.

Prior to today, Omega had defeated Woods in Street Fighter V, and Woods took his revenge on Omega in Tekken 7. With their best friends by their side, the bitter rivals looked to decide, once and for all, who the better man was.

Before the match began, Kenny Omega told Xavier Woods and the rest of the audience that he’d be the second man, and planned on meeting Woods there. However, it was revealed after Kofi Kingston defeated Nick Jackson that Xavier would be the anchor of their team, meaning that instead of Omega/Woods 3, we would see the IWGP Heavyweight Champion take on Big E.

Below are the results of the anticipated 3-0n-3 match:

With a crushing 2-0 victory over one half of the IWGP Tag Team Champions, Xavier Woods and the New Day were triumphant. However, that wouldn’t be the last match of the day.

As Woods trashed the Elite, Kenny Omega called him out, saying that this has always been about the two of them, and it should end with the two of them. After some convincing, and the introduction of habanero peppers, Woods accepted his enemy’s challenge. The losing team would have to eat one pepper each.

Woods and Omega would fight one on one, with their teammates cheering them on. The first man to five would win. Xavier Woods played Ibuki, while Kenny Omega picked up Cody Travers, Street Fighter V’s newest DLC character, who will be available on June 26th.

The two men took each other to the virtual limit, but Kenny Omega defeated Xavier Woods, 5-4. Woods, stating that this had nothing to do with Big E and Kofi, choked down two peppers, followed by Omega who, refusing to be upstaged, ate the last one. Afterward, the two men gave a speech to the fans in attendance and those watching at home.

“This day is what we’ve been working towards for three years,” said Woods. “So I want to thank every person. Anyone who’s ever watched a dumb video we made. Everyone who ever picked up a controller or a stick because they love the fighting game community. Four years ago, I reached out to [Omega] on Twitter. I slid into his DMs!”

“You know it’s true,” Omega said, suffering through the pain of the pepper while also asking for milk, “years ago, two men set on a path. Not only to change the wrestling world but the world of video games. We felt these two worlds should unite and come together for one common goal. This video game competition has happened between people from two completely different companies. In a literal sense, it really is a New Day.”

“News flash, we don’t hate each other. In fact, what we want to do is work together to give you the greatest entertainment package you’ve ever seen. As far as I’m concerned, step one is a giant success. This feud, as of today, is over.”

For those wondering if Xavier Woods is okay, he took to Twitter to let his fans know that he’s okay…sort of.

I've puked three times, and I can now feel the heat moving through my intestine like a stone the size of my fist…. the battle on the other end begins. Worth it. This is one of the happiest days of my life. #E3 pic.twitter.com/1LREmQf6UJ

Congratulations to Kenny Omega and Xavier Woods on achieving their goal today. Hopefully, we can see them interact in the ring one day.