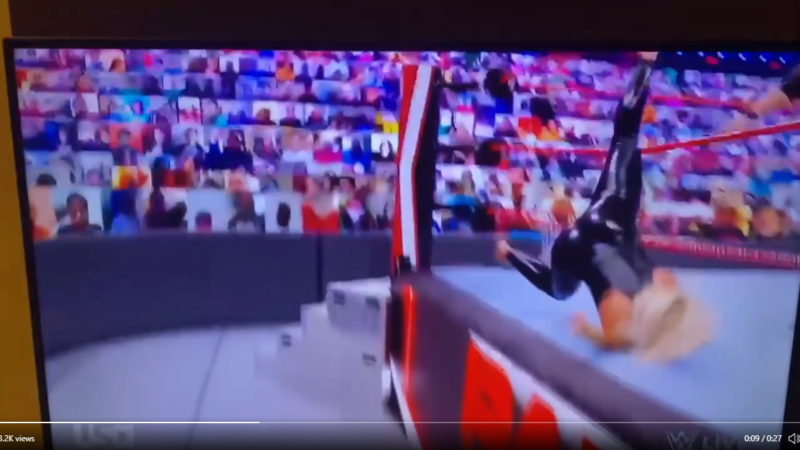 Nia Jax has a reputation for being one of the less-than-safe wrestlers in WWE. Throughout her wrestling career, Nia Jax has been involved in multiple injuries. In recent months, before Kairi Sane left WWE, Jax injured her more than once during their clashes. During this week’s episode of WWE RAW, Nia Jax possibly injured another WWE Superstar while throwing her out of the ring – Mandy Rose.

Jax was in a match with Asuka on RAW, during which Lana’s scuffle with Shayna Baszler caused a distraction. Asuka trapped Nia in an armbar, and Shayna interfered to help Nia. After the match, a chaotic brawl broke out where Mandy Rose, Dana Brooke, Lana, and Shayna were all involved. At one point in this brawl, Nia threw Mandy Rose out of the ring with a lot of force.

While falling out, Rose grabbed her arm and looked as if she was hurt. The referees rushed Rose away from ringside and to the backstage area where she could be examined further. No update has been provided by WWE on Rose’s condition, but the fact that Rose was immediately rushed away indicates it could be serious.

Mandy Rose is scheduled to be a part of the RAW Women’s Survivor Series team with Jax, Shayna Baszler, Dana Brooke, and Lana less than two weeks from now. If the injury is serious, plans might have to be changed. For now, there is no report on the future, but hopefully, the injury was not too serious. Rose might be fit in time for the event if the injury was not serious.