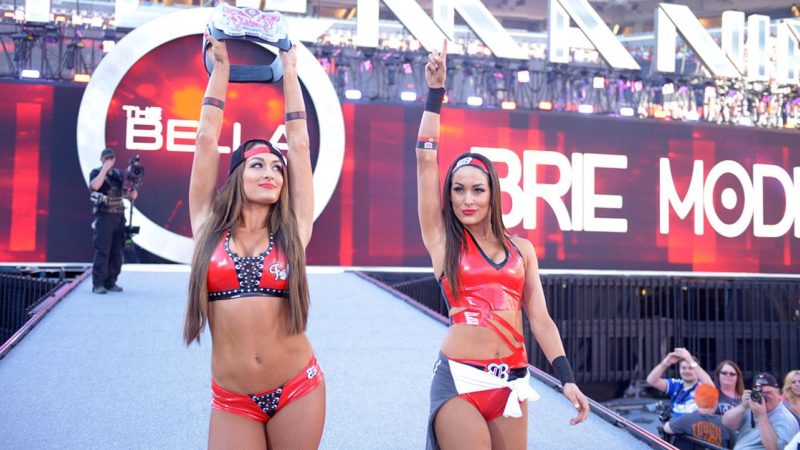 Nikki Bella speaks about her sister.

Nikki Bella spoke about her sister Brie Bella and the latter’s difficult labor in a recent promotional interview for Total Divas.

‘Fearless’ Nikki had words of high praise for her twin sister as well as all the other mothers the world over. Brie recently gave birth to her first child with husband Daniel Bryan, this past May 9th. The couple initially opted for a natural birth, but had to get a C-Section done owing to her difficult labor.

Nikki Bella opened up on the experience, whilst citing the strenuous experience women put their bodies through in the process. Here’s what the former Divas champion said regarding the same-

“She tried to go natural and it was like eight or 10 hours into it had to get an epidural and then in the end had to get a C-section. Her abs were too tight, go figure, Leave it to the WWE Superstar, abs too tight.”
“I mean, it’s definitely a struggle for women in the beginning and it should be. I saw what they put their bodies through and oh my gosh! I give all the moms in the world so much credit. That is not easy, labor. I think it takes minimum a week to heal from that.”

I still can’t stop staring at her. Truly the greatest gift you could ever receive. I thank the Lord so much for this precious little angel. I’m so happy I get to go home now but I couldn’t have done it with all the nurses this week. They are true rock stars and they taught me so much. Thank you all ❤ #nursesweek and I can’t believe I get to celebrate Mother’s Day tomorrow as a Mom.✨ 📸by: @shannonleephotoaz

Nikki helped her sister Brie get through the situation and the latter gave birth to Birdie Joe Danielson on the 9th of May. The new mom bid adieu to the squared-circle last year, while ‘Fearless’ Nikki who recently competed at Wrestlemania 33, has also stepped away from in-ring competition, albeit temporarily.

The Bellas have come a long way since their WWE debut, after being initially panned by several critics for their lack of wrestling skills. Nevertheless, Nikki, in particular, is now an absolute beast in the ring, and her current injury rehab- be that as it may- I hope to see her back in the SmackDown Live Women’s division real soon. As for Brie, congratulations are in order for the new mother! Welcome to the WWE Universe Birdie Joe Danielson!