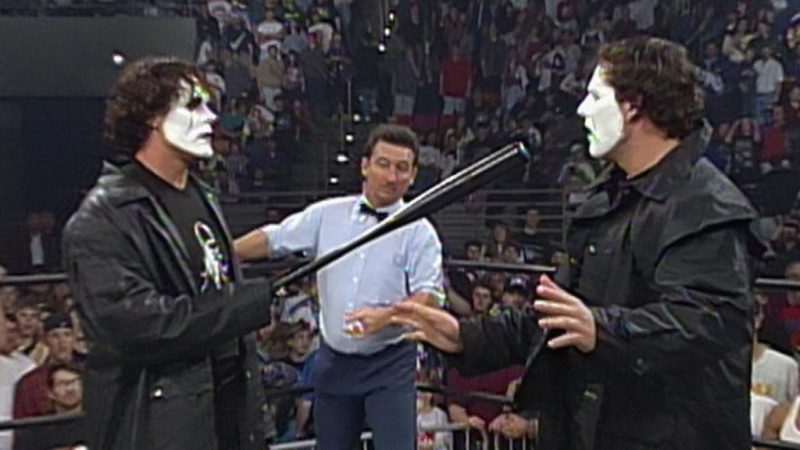 Jeff Farmer (a.k.a. NWO Sting) was recently a guest on the Pancakes and Powerslams Show, and you can check out some highlights from the interview here:

On the Cobra gimmick:

“I liked [Cobra]. It had a lot of potential, and it was an interesting time in WCW. There was a lot of pressure for television time. A lot of guys were coming in from the [WWE], and so it was a lot of talent, but not enough air time for everybody to get on television. So there were some good characters then who just didn’t get a lot of chance to really get a push.”

On the creation of NWO Sting:

“I think the major part was [Bischoff] thought that [Sting] and I were similar in size and stature. I that that was part of it, that I could fool them because we looked similar enough. I wasn’t 6’9″ or anything like that, so I think it was definitely part of the match-up in size. I was probably a little heavier than [Sting] back then, but it was definitely close enough. Eric came up and told me, hey, this is a big deal. If this gets out, I’m going to squash it. So even some of the boys didn’t know what was going on. It was something that he definitely kept guarded, so that it was kind of a shock to everyone when I came out of the limo and attacked Lex Luger.”

On who he gives credit to for extending his career:

“I don’t think it was going to be a continuing character. I think [Hulk] Hogan liked it, and he said hey, this is good! We can use this ‘bad Sting’ character to cause a lot of havoc and work with the nWo.”

On the missed opportunity of a Sting vs. Sting match:

“My character was more popular than Sting in Japan, and I always thought we could have a huge match with the real Sting and the nWo Sting. We could have took the house down in Tokyo, if we would have ever done that match. It was just a missed opportunity, really in the US too. Think about what you could have done. You could have had [us] wrestle each other, but what if somehow we joined up as a tag team, and then you have two Stings? That would have been awesome too. There could have been a lot of scenarios that could’ve played out. That was something that never got a chance to happen, but I think it would have been cool.”