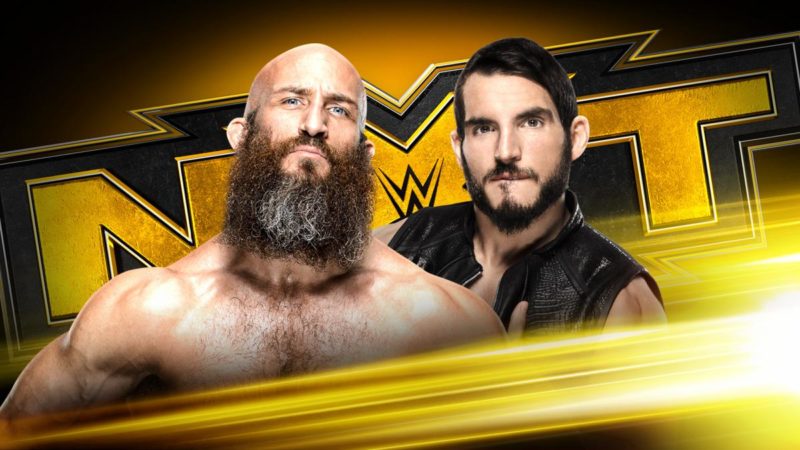 WWE’s black-and-gold brand returns this week for a pre-taped empty arena show from the WWE Performance Center in Orlando, FL for the continuation of the TakeOver matches airing on the USA Network at 8:00 p.m. EST.

One empty building, One ring, one final beat. Two best friends-turned-bitter rivals finally enter the ring, only one will exit, the winner of the long time coming fight to end the rivalry once and for all. Both superstars determined to prove who is the true heart and soul of NXT (with the stipulation if they happen to engage again following tonight’s end all battle, NXT will move on without either superstar).

Featured below are results of the April 8, 2020 episode of NXT On USA written by wrestling-edge.com’s newest female reporter, Jamie Rush. Follow me on Twitter @JamieRush312

As we start off tonight’s NXT on USA, a video package airs highlighting the rivalry between Ciampa and Gargano with a voice over from Triple H explaining the details leading to tonight’s Empty Building Match.

We enter the closed-set NXT Full Sail University Arena as we begin tonight’s closed-set performances. The #1 Contender Ladders Match is announced as we head to the ring!

Out first is Io Shirai to kick things off in this #1 Contender Ladder Match for the Women’s Championship as a strobe light flashes her into the ring where she awaits her opponents. Tegan Nox makes her way to the ring alongside Io Shirai as her music sounds in the arena. Nox jumps into the ring, standing in front of the already set up ladder outside of the ring. Next, Robert Stone asks for our attention as he announces “the face of the division” Chelsea Green. Green makes her way to the ring where Nox and Shirai stand in their corners as Green finishes her entrance and poses. Music sounds for Mia Yim next as Yim walks in with a banadana covering her face as she enters the ring, pulling it down as she looks at her opponents inside the ring.

Out next, accompanied by Raquel Gonzalez, is Dakota Kai. Kai poses with Gonzalez then enters the ring alone with the other contenders in this ladder match! Last to the ring is Candace LeRae, LeRae stops to touch the ladder set up at ringside before entering. The match is formally announced as all six women begin to trash talk one another. The referee signals for the bell. The bell rings and the match begins!

All the women immediately pair of and move to opposite corners as Kai dumps Shirai out of the ring. Gonzalez is signaled to bring the match to the ring as Kai levels the women inside the ring, taking them down one by one. LeRae with a Basement Dropkick wipes out Gonzalez, stopping her short of getting the ladder into the ring to friend, Kai! Half the woman brawling inside the ring, half the woman brawling ringside as everyone desperately attempt to take down as many contenders as possible to ultimately climb that ladder!

A “Pain Train” for Dakota Kai as each of the contenders attack Kai one by one inside the ring. Flap Jack on LeRae by Shirai. Shirai exits the ring, grabbing a ladder from underneath the apron at ringside. LeRae stops Shirai and both women fight it out in the ring. Green interrupts, face planting LeRae into the ladder in the center of the ring with a smile as we go to our first commercial break!

Kai and LeRae stare each other down on either end of the ladder, costing them both the chance as Shirai and Nox take them down. Shirai and Yim attempt to climb the ladder, but are immediately dragged down. Green nails Yim with a chair on the ladder, Yim counters, smashing the chair into the knee of Green. Shirai catapults Yim face first into a ladder set up in the corner of the ring, then howls. As Shirai attempts to make her way up the ladder, Gonzalez enters the ring knocking over one ladder, then the one holding Shirai.

Shirai flying with the ladder, then landing Crossbody onto the remaining women at ringside as we go to commercial break once again.

Back from commercial break, Raquel Gonzalez continues to be a problem for the contenders in this match up, stopping only to assist Dakota Kai into the ring, then climbing in herself to lift Kai over her shoulders and begins to climb the ladder herself! Yim grabs Gonzalez momentarily, Gonzalez lands a kick on Yim. Gonzalez sending Kai higher up the ladder, LeRae enters the ring sending Kai crashing back to the canvas as Gonzalez and Yim duke it out in the corner of the ring.

Shirai then grabs Nox and pulls her from the ladder as well. LeRae with a German Suplex on Shirai. Robert Stone commanding Chelsea Green to enter the ring and climb the ladder, advising her that she’s good to climb. Green struggles with a leg injury, unable to climb the ladder. Stone enters the ring, injecting himself in the match. Stone gets to the top of the ladder, pulling Green up the ladder to the briefcase. LeRae and Shirai knock over the ladder, Stone slamming to the mat, Green getting tied up in the ropes as she falls with the ladder.

Another ladder is set up, Shirai and LeRae climbing the ladder, Shirai sending LeRae dropping to yet another ladder that has been made into a bridge in the corner of the ring. Shirai removes the briefcase becoming the #1 contender!!

*Be sure to refresh (F5) frequently throughout the show for the latest updates and coverage!