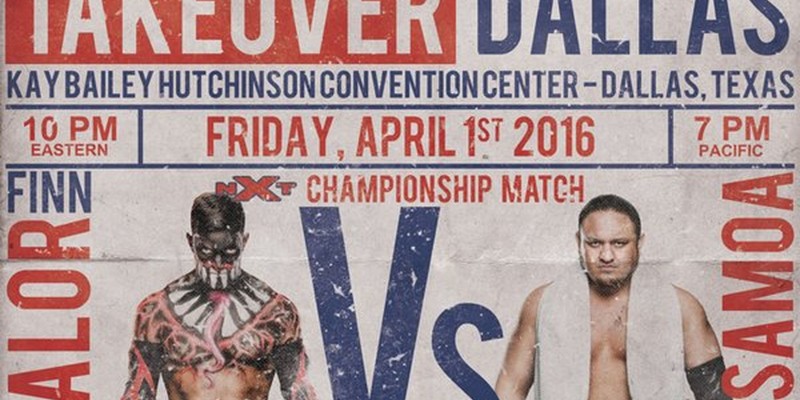 Airing Live On The WWE Network

Dawson and Gable lock horns to start the match. The fans are solidly behind Gable, who slaps Dawson in retaliation from a slap he received at the start of the match. Dawson hit two shoulder blocks on his opponent and an arm drag. Jordon was tagged in and landed a big dropkick. Gable was back in and landed a crossbody on Dawson. Wilder tried attacking Gable, but Jordon got in the ring and American Alpha landed a dropkick and German suplex on the champions.

The Revival got their momentum back and hammered at Gable in the corner. Gable landed a DDT on both members of The Revival. As Gable leaped for a tag, Wilder pulled Jordan off the ring apron. Wilder held Gable up and Dawson leaped off the top turnbuckle, but missed Gable who sold the move. Fans chanted, “Botchamania.” Jordan was tagged in and landed an exploder suplex on the champions. The champs tried to double team Jordan, but he leaped over for a two-count on Dawson.

Gable was tagged back in and exchanged pinfalls with Dawson. Jordan rammed into Dawson in the corner, allowing American Alpha to hit Grand Amplitude to become the new champions.

Bayley was shown greeting fans earlier in the day, while Asuka was seen training with Seth Petruzeli. A hype video for Austin Aries vs. Baron Corbin played.

Aries charged at Corbin immediately and kicked him in the corner. Aries hammered away at Corbin, but he was shoved off. A discus forearm sent Corbin to the outside. Corbin hit a flapjack and Aries’ chest hit the ropes. Corbin stomped on his opponent. Corbin sent Aries crashing to the ring post. Corbin dominated Aries in the corner and attack his injured shoulder.

Aries attempted to fight back with forearms. He kept slapping his opponent’s chest and landed a flying clothesline.  Aries landed a slingshot ax handle. He then climbed up the top rope and hit a missile dropkick. Corbin went to the outside, but Aries caught him with a suicide dive. Aries ran right into Deep Six on the outside. Aries barely beat the count at nine.

Corbin hammered away at Aries with punches. He went for End of Days, but Aries countered into a pin for the win.

Footage of Finn Balor entering the arena was shown. The match between Sami Zayn and Shinsuke Nakamura is next.

The two tied up early and Nakamura taunted his opponent. A knee to the midsection connected for Nakamura. The two traded wristlocks. Zayn landed three arm drags on his opponent and did his own taunt. Some stiff kicks found the mark for Nakamura and he hit a knee drop for a two-count. He locked in an armbar, but Zayn fought him off with a back elbow. Zayn caught the leg of Nakamura, but ate a spinning wheel kick.

Nakamura went up the top rope, but was knocked to the outside. Zayn tried pulling his opponent back in the ring, but Nakamura nailed him with a kick. Nakamura landed two knees to the head. With Nakamura on the outside, Zayn dove over the top rope. Back in the ring, Zayn landed a crossbody off the top turnbuckle for a two-count. Nakamura landed a series of knees on a grounded Zayn. He charged in, but Zayn hit a Michinoku Driver. The two exchanged forearm shots for almost two minutes. Nakamura’s nose was bloodied, but he had Zayn hurt.

Zayn hit two clotheslines on his opponent. Nakurama went for a flying armbar. He reversed the position into a triangle. Zayn stomped on Nakamura’s head to escape. Nakamura’s clothesline was countered into the Koji Clutch. Nakamura escaped and dropped Zayn with a kick. Zayn went for the Helluva Kick, but Nakamura reversed into an inverted exploder suplex. Nakamura went for Bomaye, but it was reversed into the Blue Thunder Bomb for a very close two-count.

Zayn went for his suicide dive tornado DDT, but he ate a kick midair. Nakamura went up the second rope and kneed his opponent in the back of the head. He then hit Bomaye for the victory. Incredible match.

After the match, Nakamura extended his hand and they embraced. Zayn raised Nakamura’s hand. Zayn was left in the ring alone and the crowd gave him a standing ovation.

A WWE Hall of Fame video clip played. Samoa Joe was shown preparing for his title bout against Balor. Bayley vs. Asuka for the NXT women’s title is next.

Asuka threw out a spinning heel kick to keep Bayley on her toes. A forearm sent Bayley back a bit. The two ducked each other’s ground strikes. Bayley threw her opponent to the ropes, but Asuka connected with a hip attack. The champion climbed up the second rope and landed a spinning back elbow. She went up the top turnbuckle and landed a crossbody for a two-count. Asuka caught Bayley in an armbar, but the champion quickly reached the ropes. With Asuka in a tee of woe, Bayley used the bottom rope for leverage to drop an elbow.

Bayley landed a hurricanrana off the top rope, but couldn’t secure the win. The champion locked in a guillotine choke, but Asuka popped her head out and got in an ankle lock. Bayley got out by dumping the challenger to the outside. She then landed a suicide dive hurricanrana. Asuka turned the tables a bit with a dropkick. She landing a knee on a grounded champion for a two-count. She went for a hip attack, but was countered into a back suplex.

The two went for dropkicks simultaneously. Bayley went for a kick, but Bayley latched onto a knee bar midair. She caught a kick and elbowed the knee of the challenger. Asuka locked in a flying armbar. Bayley got out a ducked under a kick for a small package. A Bayley to Belly attempt was thwarted. Asuka landed a suplex and went back to the armbar. She tried to transition to the Asuka Lock and she locked it up. The champion tried fighting her off, but the challenger choked her out to win the title.

The final hype video for Balor vs. Joe aired. Bobby Roode was shown in the crowd. The combatants made their entrances and the champion made his way out with a chainsaw.

The two went after each other right away. Joe was bloodied not even a minute into the match. Balor leaped over the top rope onto Joe. Balor was launched into the crowd by Joe. This match is violent and we just got started. Joe threw some punches at the champion. He knocked Balor off the apron with a kick. Joe followed it up with a suicide dive. Officials checked on Joe’s cut, which angered the crowd. Joe caught Balor in the ring and planted him. Joe went for the Coquina Clutch, but Balor avoided it.

Joe chopped the chest of the champion in the corner. Balor landed a dropkick and once again the medical team went to wipe the blood off Joe. A series of forearms dropped the challenger. Joe went up the top rope, but was chopped off. Balor connected with a huge running kick on the apron. Balor went for the Sling Blade, but was countered into an overhead belly to belly suplex.

Joe avoided a dropkick and hit a senton splash for a two-count. The challenger landed powerbomb and transitioned into a modified boston crab. He then moved to a crossface. Balor rolled out and hit a double stomp. He then landed the Sling Blade. Balor was cut off at the top rope, but Joe kicked him and landed the Muscle Buster for a two-count. The champion hit another Sling Blade and a dropkick to the corner. He connected with the Coupe de Grace. He tried to lift Joe up, but he was reversed into the Coquina Clutch. The champion reversed it into a pin to retain his title.

Balor celebrated as Joe walked off in anger and disbelief to end the show.