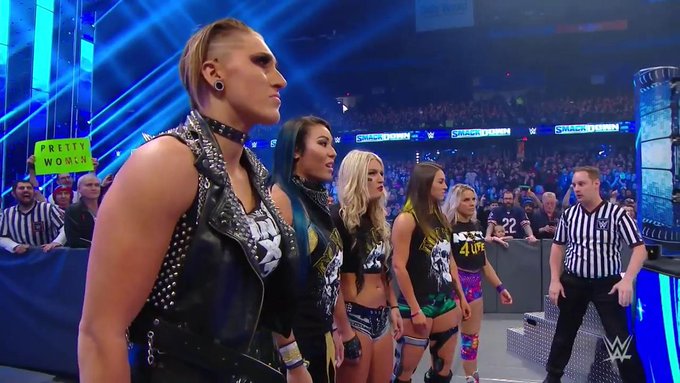 We’ve officially arrived at the Survivor Series weekend. At the moment, both PPV events are still missing competitors. Heading into NXT TakeOver: WarGames, Team Ciampa is one member short. As far as Survivor Series goes, prior to SmackDown, neither NXT teams had been revealed.

Tonight, however, the NXT brand possibly introduced the five women who would represent them on Sunday. One of the breakout stars of the brand supremacy angle, Rhea Ripley, would lead as captain. Following her into battle tonight was Mia Yim, Tegan Nox, Candice LeRae, and NXT UK’s Toni Storm.

The team rallied behind Ripley, who picked up an incredible win over Charlotte and Sasha Banks. NXT may be able to ride this wave of momentum all the way to Sunday. The Black & Gold brand has built quite a dangerous team for the PPV, especially with Ripley’s former rival, Toni Storm, by her side.

That being said, this line-up has not been confirmed for Sunday. As of this moment, only Ripley’s status as captain has been revealed. The assumption is that both teams won’t be made official until after WarGames when the company knows the status of the NXT Superstars.