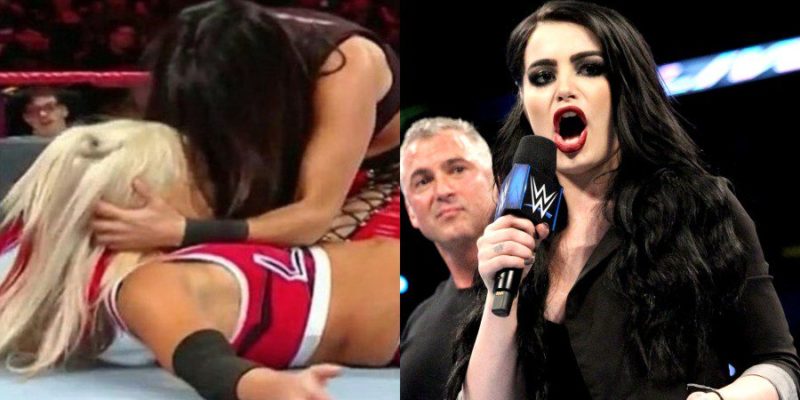 The Brie Bella/Liv Morgan saga is showing no sign of letting up and the latest person to offer their opinion is someone with experience of dealing with injuries, SmackDown LIVE General Manager Paige.

Just to recap for those who have been living under a WWE rock, Brie Bella injured and concussed Liv Morgan on the September 24 issue of Raw after one of her YES kicks caught Morgan square in the face. The backlash that followed was swift (and out of order in some cases) with one half of the Bella Twins being accused of being dangerous in the ring and many questioning her wrestling ability. Unsurprisingly, WWE and the wrestling world responded and inadvertently probably made things worse with statements like “accidents happen” and “this ain’t ballet” banded around shortly after.

Now that’s covered, back to Paige. The Brit has of course been forced to retire from the ring due to neck issues with the last bump she took being a career ending one from Sasha Banks. The Boss at the time was also blamed by fans for injuring Paige.

One of the differences between the incidents was that Paige’ match was stopped immediately after the injury occurred, and it is on that basis that she seems to have come out in defence of Brie Bella and shockingly called out Ruby Riott and Sarah Logan as deserving of blame for the incident. She had the following to say via Lillian Garcia Chasing Glory podcast:

“Accidents happen in the ring. I’m not gonna hold Sasha accountable for what happened to me. It is what it is. We’ve been all doing it for years and – at one point another one of us is gonna hurt each other. We can’t be perfect all the time.

Which is the same thing of what I get with Brie – I felt so bad for Brie. She’s never hurt anyone, this is the first time she’s hurt someone and she gets blamed for it? Come on, dude – it’s an accident. It’s an accident. Liv doesn’t blame her.

The thing that I don’t like about it is the fact that her teammates brought her back in the ring to do a suplex when everyone knew she was knocked out. That’s the thing that I don’t like. It’s just like – don’t come back in for the suplex. You know you’re hurt. We have concussion meetings all the time. Take care of yourself. But also, your tag partners – as much as I love them, they’re very sweet girls – they know she got knocked out, you don’t let her back in the ring again. That’s what Sasha did with me. As soon as she knew something was messed up, she was like, ‘I’m not continuing the match’. That’s a professional. She’s like, ‘I can’t do this.’ And I was trying to continue it and I was trying, I was trying, I was trying and she was like, ‘Stop. You’re gonna hurt yourself even more.’ And I get where Liv comes from, she wants to continue-continue, but stop. It’s not worth it. You end up like me.

So with Ruby and Sarah, take care of your teammate. You see that she got hurt. Don’t let her back in the ring again. And referee in there, don’t let her back in the ring again. But apparently the ref didn’t know anything. I’m like, ‘Come on! How do you not know?’ But Brie in that story, and they were trying, they were trying to take care of her, you know? I felt so bad for Brie. I felt bad for both of them, but the backlash that Brie got – if it was anyone else, there wouldn’t have been that much backlash – because she’s a Bella.”

Now, we of course remain neutral with our opinions here, but in this instance I feel a WTF is needed… and so does Liv Morgan through deciphering of Twitter code:

I’m so happy I haven’t done a podcast.