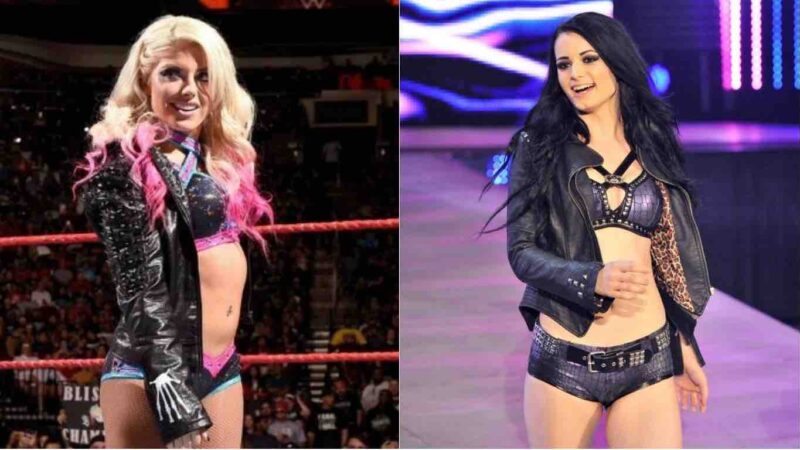 Alexa Bliss is one of the loved stars of WWE. The former WWE star Paige recently talked about a moment involving Bliss is her most-viewed clip on her Twitch channel. In 2020, Bliss appeared in a live stream on Paige’s channel alongside Billie Kay, Nia Jax, Peyton Royce, and Renee Paquette. The RAW star took her shirt off during the video after Paquette asked why she was not wearing a bikini. The clip, titled “AlexaBlessed,” currently has 40.5k views on Paige’s channel. Her next most popular clip has 24.1k views.

Paige opens up on the moment

Paige spoke on “The Bellas Podcast” about her success on Twitch. The 29-year-old explained that she has been joined by fellow WWE stars in the past, including Bliss:

“I had a big group of people and then Alexa Bliss took her shirt off,” Paige said. “I was like, ‘Oh no, sis, this is live!’ She had a bra on underneath, obviously, like a sports bra, but it was a low-cut one. She’d been sipping a few drinks during the stream and then she took it off. It’s still my most-viewed clip of the stream and I’ve been streaming for nearly three years. It’s crazy.”

Alexa Bliss recently faced Asuka on the latest episode of RAW. The match lasted just two minutes and 20 seconds before Bayley, Dakota Kai, and IYO SKY attacked both women. Bianca Belair then intervened, setting up a match between herself and IYO SKY. It seems the fans are likely to get a six-woman tag-team match in the future.