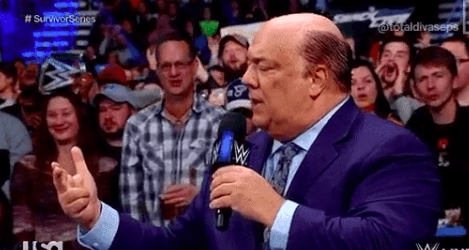 As seen on this week’s SmackDown LIVE, The Advocate of the Beast Paul Heyman showed up on the blue show. Heyman appeared on the show to further his client’s feud with AJ Styles, ahead of their match at Survivor Series this Sunday.

Heyman cut another vicious promo per usual but this unexpectedly enough, he managed to sow some nasty seeds of conflict between Daniel Bryan and AJ Styles.

This led to Styles reminding Heyman that he’d not only defeated Bryan two weeks ago but he tapped him out. Music hit and Bryan came out and immediately took offence of what was happening in the ring.

Bryan told Styles not to take his name without any reason but Styles did it anyway and a brawl broke out between the two. The brawl soon became really nasty and quite a few officials had to interfere to stop the two.

The brawl continued backstage and Shane McMahon had to announce a match between the two with the WWE Championship on the line to cool things off.

After @HeymanHustle brought up @WWEDanielBryan as the BEST in-ring performer in @WWE history, it seems @AJStylesOrg may have taken exception. #SDLive pic.twitter.com/6AWPbz961d