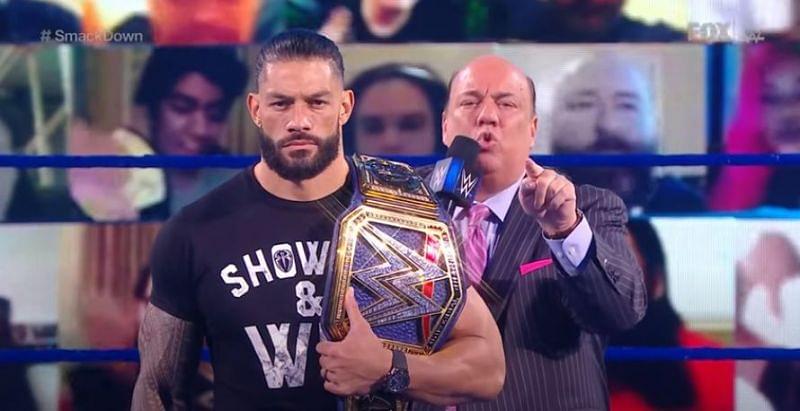 Roman Reigns shocked the WWE Universe when he partnered up with Paul Heyman after his surprise return at SummerSlam. Brock Lesnar’s former manager has been by Reigns’ side on every appearance of his ever since.

But this alliance is not something that was recently planned. In an interview with Metro.co.uk, Heyman revealed that the partnership has been in the works ever since Reigns debuted on the main roster. He also talked about Reigns’ upcoming match at Hell in a Cell.

Reigns will be defending his WWE Universal title against Jey Uso this coming Sunday. The match also has an ‘I Quit’ stipulation written into it.

On what Roman Reigns is putting on the line

A lot is at stake for Roman Reigns as he takes on his real life cousin Jey Uso. He will not just be fighting to retain his Universal Championship, but also to cement his position as the undisputed Tribal Chief.

Heyman said that while Jey Uso will be fighting to prove he is better than Reigns, the Tribal Chief will be putting his life’s goals on the line as well as his claim to be the family head.

Heyman said that the winner of this match will be looked up to as the “authentic head of the family” by generations of the past, the present, and the future.

Reigns and Uso clashed in the brilliantly executed main event of WWE Clash of Champions. The match ended with Jimmy Uso throwing in a towel for his brother Jey to stop Reigns from beating him down.

On how long the alliance has been in the works

Roman Reigns debuted on the main roster back in 2012 at the Survivor Series as part of The Shield along with Seth Rollins and Dean Ambrose. Paul Heyman brought the three Shield brothers in as mercenaries to protect the-then Champion CM Punk.

Later they became mainstay names on the main roster and became one of the most popular and successful stables in the history of WWE.

Heyman stated that the plan for him to team up with Reigns as his ‘counsel’ has been in the works ever since.

Heyman urged the fans to tune in to Hell in a Cell on Sunday, unless they want feel ‘left out of the conversation’ and ‘miss something special’.