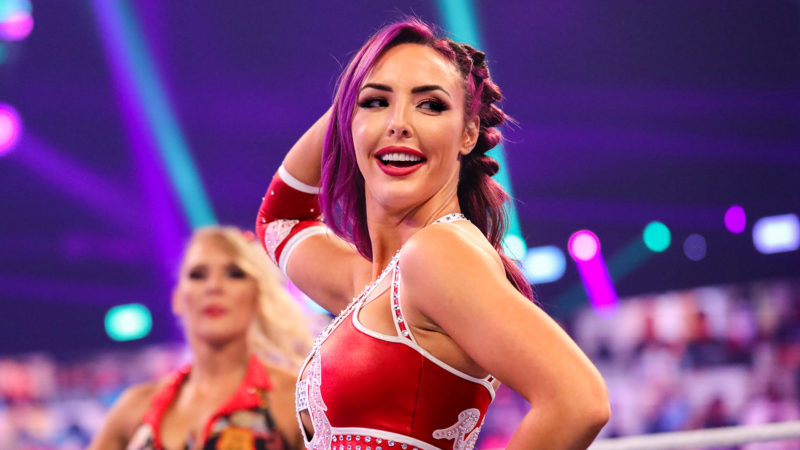 Peyton Royce was spotted in the crowd at AEW Double or Nothing. See a photo below.

WWE star Bayley recently reacted to Dax Harwood’s incredible body transformation ahead of AEW Double Or Nothing 2021. She had sent out a Tweet to appreciate the AEW star.

Dax posted a body transformation photo comparing his physique from the time he was in WWE to the present day. It has been noted by the fans that Dax has worked some extra hours in the gym and now flaunting his transformation of the physique. Sting Breaks Silence On Triple H ‘Burial’

During the exchange, Harwood also took a shot at The Inner Circle’s Ortiz and Santana in his tweet and said that the duo won’t be able to stand against FTR during the Stadium Stampede match.

Bayley and Harwood share a very close friendship from the days of WWE and thus she is proud of her friend as well.

Dax Harwood of FTR alongside his tag team partner, Cash Wheeler will be the part of The Pinnacle (MJF, Wardlow, Shawn Spears, Cash Wheeler, and Harwood) and will go up against The Inner Circle (Chris Jericho, Jake Hager, Sammy Guevara, Santana, and Ortiz) in a Stadium Stampede match at tonight’s AEW Double or Nothing pay-per-view.

Stadium Stampede ready. Ortiz & Santana couldn’t keep up with us in a wrestling match. How in the hell the gonna keep up in a fight?!

After this is over, they can go back to gymnastics with their play-wrestler friends.#TopGuys#ThePinnacle#AEWDON#UncleDax pic.twitter.com/Fk0Rl6SnbC