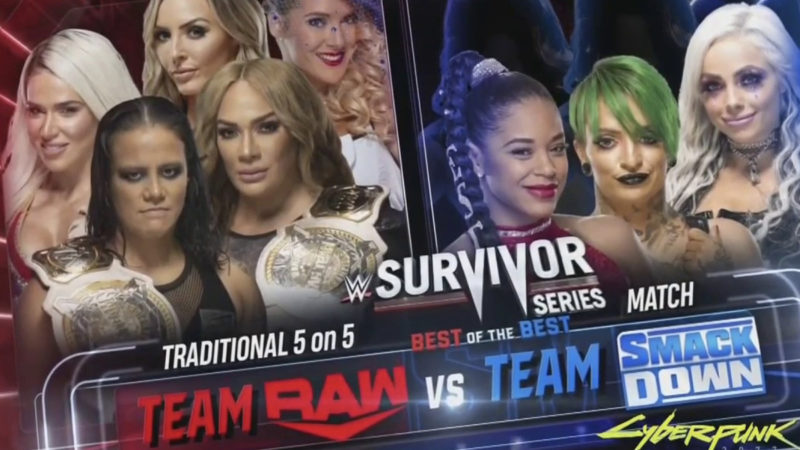 The announcement came in the wake of both Mandy Rose and Dana Brooke getting injured on the show.

Why Peyton Royce and Lacey Evans are going to Survivor Series

It was rumored after last week’s RAW that Mandy Rose had sustained a legitimate injury. It possibly happened in a segment involving Nia Jax.

Nia Jax has earned a reputation of being an unsafe performer because of the number of injuries she has caused. She threw Mandy Rose out of the ring for a spot and with more force than it was necessary. Rose was seen holding her hand and she was taken away backstage immediately for medical examination.

Seems like the injury was of serious nature, as she was written off television on last night’s RAW. Shayna Baszler stomped on her arm on the steel steps as Nia Jax held her down.

It happened during a six-women tag team match with Nia Jax, Shayna Baszler, and Lana on one side and Mandy Rose, Dana Brooke, and Asuka on the other.

Despite losing Mandy Rose to the injury, Asuka managed to take the win by making Lana tap out to the Asuka Lock.

Later on, when Mandy’s tag team partner Dana Brooke was at backstage outside the Trainer’s Room, she was brutally attacked by RETRIBUTION’s Reckoning.

Adam Pearce announced soon afterwards in a backstage interview with Kayla Braxton that both Mandy Rose and Dana Brooke were out of Survivor Series for their injuries. Peyton Royce and Lacey Evans will replace them on Sunday’s pay-per-view.

Despite the upset, RAW Women’s Team for Survivor Series has all five members confirmed. SmackDown, on the other hand, is yet to fill two more spots. In last week’s SmackDown, Liv Morgan joined Ruby Riott and Bianca Belair on the team.