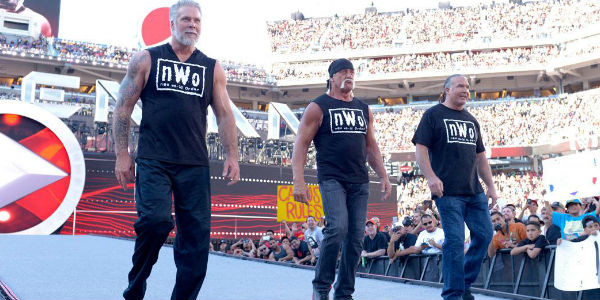 Hulk Hogan made his long-awaited WWE return on the day of the Extreme Rules PPV last month and now it’s only a matter of time before he makes his on-screen return for the company.

Though if some recent speculations are to be believed then Hogan may not return alone and instead, we might see a reunion of the original three members of nWo.

Hulk has been teasing a reunion of the three in his recent social media promos and nWo-styled cuts have been appearing in his videos.

Now a fan has noted to wrestinginc that Hulk, Kevin Nash, and Scott Hall were spotted at Hogan’s Beach Shop in Orlando on Thursday afternoon and what’s interesting here is that a camera crew was seen filming them.

While not confirmed, it’s possible that the camera crew belonged to WWE and the shooting they were doing could be for the rumored Network special on the trio.

We’ll keep you posted on the matter.