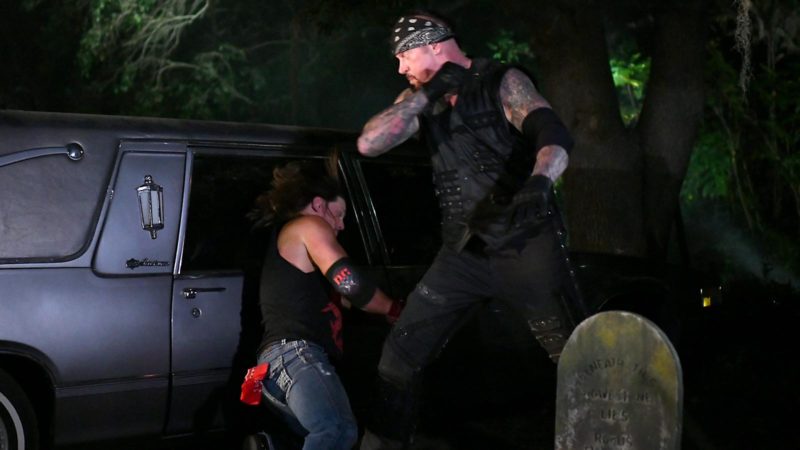 The Undertaker wrestled AJ Styles in the first-ever boneyard match at WrestleMania which turned out to be a buried alive match in a cinematic feel.

The match had many high points and it saw moments such as the Taker’s return to the biker persona and him using Metallica music for his entrance.

Gallows and Anderson interfered in the bout, but they weren’t able to stop the Dead Man and Undertaker managed to pick up the victory in this first-ever match.

And while people had their doubts on whether or not the match would be able to deliver, it’s receiving high praise from the fans. You can check out some reactions to the match below:

my reaction to haters saying they didn’t like the boneyard match
pic.twitter.com/wxUwd22oeO

due to everybody staying home and being unable to see any other movie this year, The Boneyard Match has taken home the trophy! pic.twitter.com/oaDI4mzATK

Well that was the greatest thing I’ve ever seen in my life. From now on, all matches to be in a Boneyard. Thank you. #WrestleMania

I want every wrestling match to be a Boneyard Match from now on. #WrestleMania

MFW someone says they didn’t like the boneyard match pic.twitter.com/Q8wW46NWzc

This boneyard match is the best thing I’ve seen on television in a real long time. #WrestleMania Kane has to be coming for the save

This Boneyard Match has been well produced👏🏻👏🏻

Was this the best Boneyard Match EVER?! #WrestleMania #BoneyardMatch pic.twitter.com/fRlGRsoUqe

even the boneyard match gotta end in a cuddle. pic.twitter.com/Iez2iZ7Jhs

What did you think about the first-ever boneyard match between The Undertaker and AJ Styles? Let us know your thoughts in the comment section below.