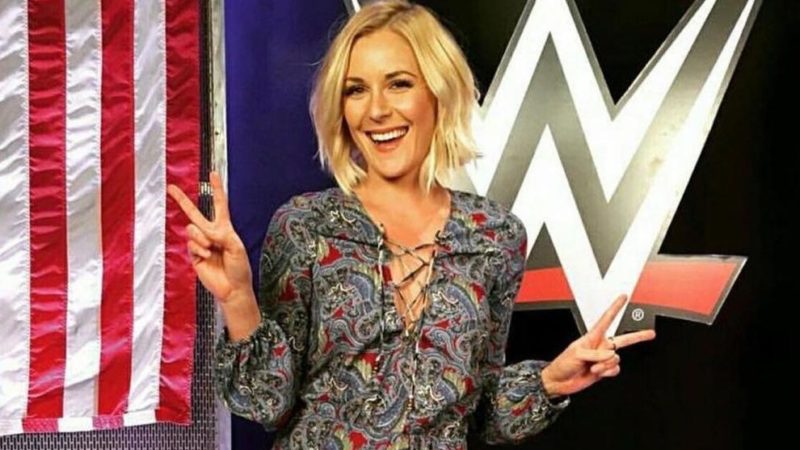 WWE commentator Renee Young is apparently parting ways with the company after spending years as one of the top members of the broadcast team.

Outkick.com was first to report the news, which was later verified by several additional media outlets.

Young reportedly gave her notice to the company a week ago but is expected to finish up her obligations for the upcoming WWE SummerSlam 2020 Weekend.

As of this writing, it is unclear where she is contractually or verbally committed to finishing up with the company, past the point that she will be working the WWE SummerSlam Weekend shows coming up in a few days.

It is obviously being speculated by many that Young could end up jumping-ship to All Elite Wrestling (AEW), where her husband Jon Moxley is the current reigning, defending AEW World Heavyweight Champion.

Renee Young was signed by WWE in 2012 after a stint with Canada’s Score Television Network. During her time in the company, she has played several crucial roles for the company. She has worked as a backstage interviewer, including on FS1’s WWE Backstage with Booker T, CM Punk, and several other Superstars.

She has also hosted a number of PPVs and talk shows, and performed as a main cast member for Total Divas season 6. In August 2018, Young became the first woman to be a full-time commentator for Monday Night Raw. More than a year later, in October 2018, she switched brands to work as a ‘special contributor’ on SmackDown.

Earlier this year in June, Young announced via Twitter that she had tested positive for COVID-19. This happened a few days before she tweeted about having a “big fat announcement”. It turned out to be about handing in her cookbook manuscript.

Young is married to AEW World Champion Jon Moxley, a former WWE Superstar. There have been speculations in the past of Young joining her husband on the promotion. But there has been no announcement as of yet regarding her next move.

Young’s exit would be a big loss for WWE, as she was a prominent broadcast personality over the last 8 eight years.

We will keep you posted here at Wrestling-Edge.com as updates on Renee Young’s WWE and potential AEW status continues to surface.