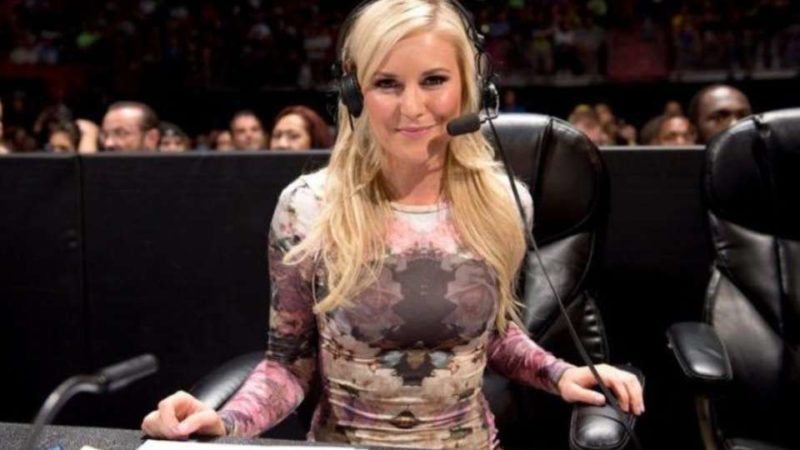 Television personality and special contributor Renee Young bid farewell to WWE last weekend after eight years with the company. The SummerSlam PPV on Sunday was her final event with WWE.

Several Superstars have sent heartfelt video messages to Renee in the wake of her exit in the latest episode of WWE’s The Bump, which left her emotional and teary eyed. One of them was the SmackDown Women’s Champion Bayley, who challenged Renee to a showdown on Raw Underground.

It's easy to see why everyone has so much love for @ReneePaquette. ❤️ ❤️ ❤️ ❤️ ❤️ pic.twitter.com/Pm1IgZaDU6

This is not the first time Renee and Bayley have bantered about having a match. The two exchanged tweets earlier in May with an ongoing social media “feud” where Young said she was down to fight Bayley anytime.

Later in a FS1 Watch Party for SummerSlam ’92, CM Punk suggested that Renee should fight Bayley on RAW Underground.

In the video message Bayley sent to Renee after her departure, she jokingly said to find her at RAW Underground if Renee ever missed her.

In reply to Bayley’s message, Renee said she was ready to return only for this “exclusive engagement”.

I will return for this. An exclusive engagement where I slap the bob right off her cute little head! 😂😭 https://t.co/RpLs2plBsu

Next steps and future projects

Renee confirmed her WWE exit during the SummerSlam Kickoff show last Sunday. Her immediate next project happens to be her cookbook, whose name she revealed during her appearance on The Bump.

“So I just finished doing my cookbook, which I guess I can announce the title of it here – I don’t think I’ve publicly said it, but it’s gonna be called Messy In The Kitchen: My Guide to Eating Deliciously, Hosting Fabulously, and Drinking Copiously. The book will be coming out probably not until closer to the spring. And, yeah, it’s gonna have like 70 recipes in there, it’s all foods, some cocktails. I had a blast writing it. It was really fun to re-connect with the writing side; I didn’t get to do much of that in WWE. So it was fun to re-connect with my voice in that sense.” H/T CageSideSeats

There are a lot of speculations regarding where she will be headed next.

A popular rumor is that she might join her husband Jon Moxley in AEW in some capacity, although none of this has been confirmed.