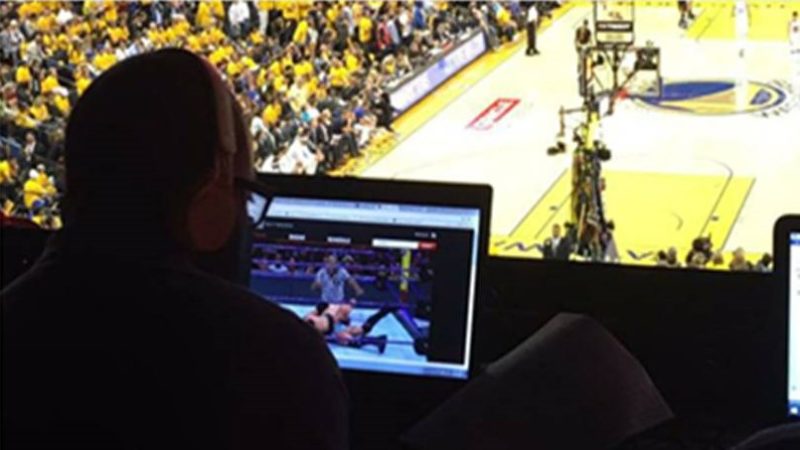 A reporter at the recent NBA Finals was apparently photographed watching WWE’s Extreme Rules PPV whilst covering the basketball event.

The professional wrestling pay-per-view went up against the NBA Finals’ Game 2 between the Cleveland Cavaliers and the Golden State Warriors.

A photo of the reporter covering the aforementioned basketball match has gone viral with pro-wrestling and basketball fans trolling the man.

The reporter in question can be seen photographed from behind-

Down 1-0 in the NBA Finals, defending champions Cleveland Cavaliers walked into the Oracle Arena in Oakland, Calif., losing Game 2 to the Golden State Warriors 113-132.

Several basketball fans on the interwebs have panned this Sunday’s match between the Cavs and the Warriors, which was in direct contrast with WWE’s Extreme Rules PPV that featured several high-octane matchups.

The WWE event was capped off by a stunning victory by Samoa Joe, who defeated Finn Balor, Seth Rollins, Roman Reigns and Bray Wyatt in their Fatal 5-Way Extreme Rules match.

Joe ended the fight via submission, applying the Coquina Clutch on Finn Balor and putting the Demon King to sleep.

Samoa Joe will now go on to face Brock Lesnar at the upcoming WWE RAW brand-exclusive PPV Great Balls of Fire on July 9th at the American Airlines Center in Dallas, Texas.

Honestly, we, as professional wrestling fans, have to ask ourselves- Can we really fault the basketball reporter? The match between the Cavs and Warriors wasn’t the greatest, to say the least, and when it comes to sports-entertainment, no one beats WWE.

After all, we always do What’s Best For Business!