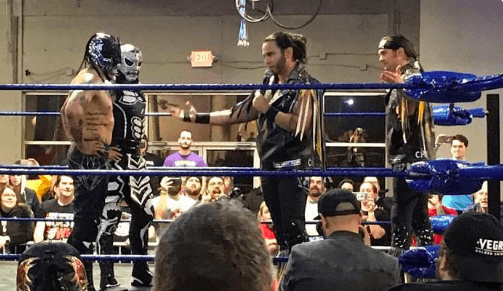 The Young Bucks are going all around the United States in a mission to recruit some of the best talents in the business today. The AEW team that includes Cody, The Young Bucks, Hangman Page, and SCU was in attendance at the Come Hell or High Water in Atlanta, Georgia this past week.

There, the Bucks had an encounter with the Lucha Brothers – Rey Fenix and Pentagon Jr after the latter defeated Christopher Daniels and Frankie Kazarian in Tag Team action.

The Bucks came out after the match and had a few words with Fenix and Penta before offering a proposal to them. The Bucks offered the Lucha Brothers a spot in the new AEW roster.

The Young Bucks offered a formal handshake to the Lucha Brothers and told them that this would act as a “contract” for now since they didn’t have an actual one to offer them.

However, before the two teams could shake hands, they were attacked by the local wrestlers working on the event.

Currently, the Lucha Brothers are making headlines all over the world working for some of the biggest promotions on the planet. However, this confrontation between them and the Bucks have surely got us thinking if they’d really end up in All Elite Wrestling.