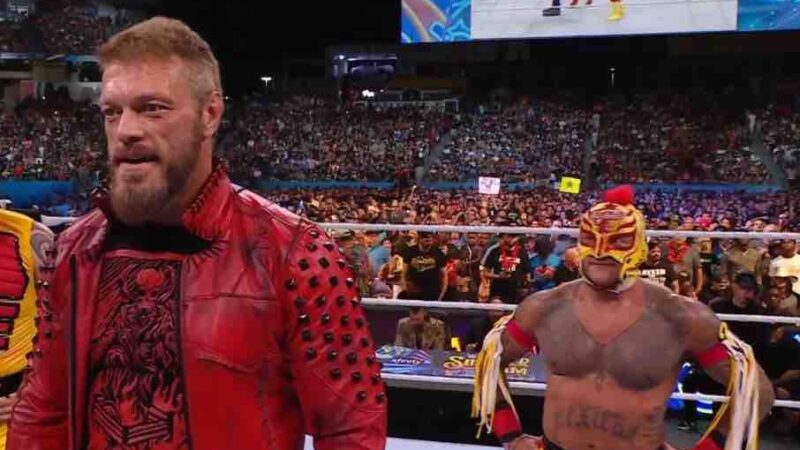 WWE Hall of Famer Edge made his in-ring return on last night’s edition of Monday Night RAW. He headlined the show as he squared off against Judgement Day member Damien Priest. ‘The Rated R Superstar’ emerged victorious in the clash after delivering some memorable moments for his hometown crowd in Toronto, Canada.

Edge talks about his retirement

Following his epic victory, he grabbed the microphone and he spoke to the fans in Toronto. He talked about his comeback after being out for so many years. He reflected on what he’s done since his return, the pandemic and then he thanked the fans.

Edge also talked about his pre-WWE days wrestling days and he knew he would be “here” wrestling in front of his hometown fans. Before wrapping up, he talked about having his retirement match next year in Toronto, in August 2023.

WWE usually does a show in Toronto every August so if he does retire next year then that would be the approximate timeframe. During his A&E documentary, Edge talked about wanting to go out on his own terms. He also expressed that he’s interested in one more match with John Cena so perhaps, that might be in the cards for him within the next year or for his final match.

Edge’s career had shortened back in 2011 when neck injuries forced him to retire. However, he made his epic return at Royal Rumble 2020 and it is nothing different from a fairytale.

Edge recently made his return after a time off at SummerSlam with a new character. The Rated R Superstar went on a hiatus for several weeks after being kicked out of The Judgment Day, a group he started. He made a surprise return at The Biggest Party of the Summer during Finn Balor and Damian Priest’s tag team match against Rey and Dominik Mysterio. He helped The Mysterios defeat Judgment Day, turning babyface in the process. However, there have been some turmoil between him and Mysterios.

Rey Mysterio told BT Sport today he’ll retire by the time he’s 50, “It’s funny because they don’t prep you up now like they do for NFL players. For wrestling, I’ve always heard from others that they just go until they can’t anymore. There’s really no start and end date. You just run through it until you can’t or until you step away to do something else. For me, now that I’m getting closer to my fifties and I see my son wrestling, I tell myself that I want to go three more years and I don’t want to go past fifty. But then I remind myself, what if I feel good. Can you still go another year? As of right now, my date has always been to not go over fifty.” This means Mysterio will retire by December 11, 2024.

Edge says he wants to retire next August. He wants his last match to be in Toronto. pic.twitter.com/CLZXEjAjnU

Thank you Edge. Chills. An amazing speech to end the night. Will see you back in one year in this building in August to end it the way you want it to. #WWERaw. pic.twitter.com/S7A3GOd8hP