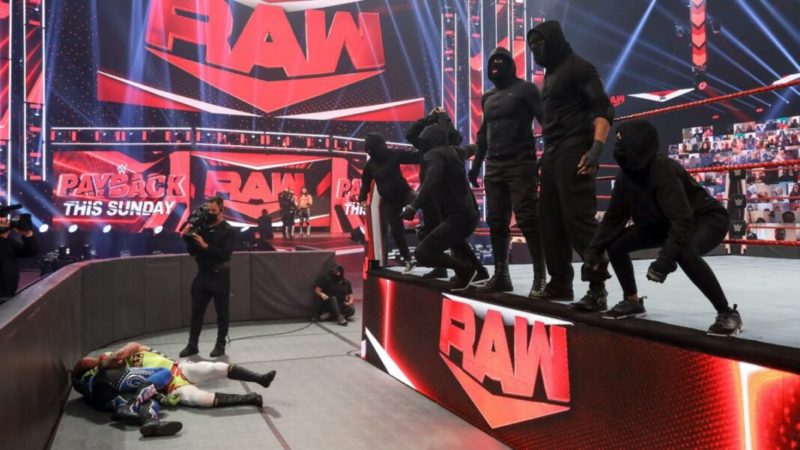 The WWE RAW episode right after SummerSlam saw the mysterious faction RETRIBUTION show up towards the end. They interfered in the last match of the night where Rey Mysterio and his son Dominik Mysterio faced Seth Rollins and Murphy as part of their ongoing feud.

RETRIBUTION has been wreaking havoc in WWE for a while now. On Monday night RAW, they orchestrated an ambush on Rey and Dominik Mysterio

Rey Mysterio later revealed unmasked pictures of a nasty cut on his head on his Twitter, which he possibly suffered during the attack by RETRIBUTION. What exactly caused the injury is still unknown. But it is likely that Rey’s head had busted open when members of RETRIBUTION threw him headfirst into the steel ring post.

The match between the father-son duo and the team of Rollins and Murphy was going great. Dominik continued his impressive performance from the SummerSlam, where he failed to avenge his father losing an eye to the Monday Night Messiah but won hearts of the WWE Universe.

The Mysterios were possibly quite close to clinching a win on their first tag team match together when the lights started going in and out. RETRIBUTION hit the ring within a few seconds and unloaded heavy beating on both Rey and Dominik as Rollins and Murphy left the ring and ran up the ramp.

Rey Mysterio was soon sent crashing into the steel ring post, which is likely to be the cause behind the bloody gash on his head. His son was thrown out of the ring as well. The show ended with RETRIBUTION standing at the edge of the ring over the Mysterios on the floor.