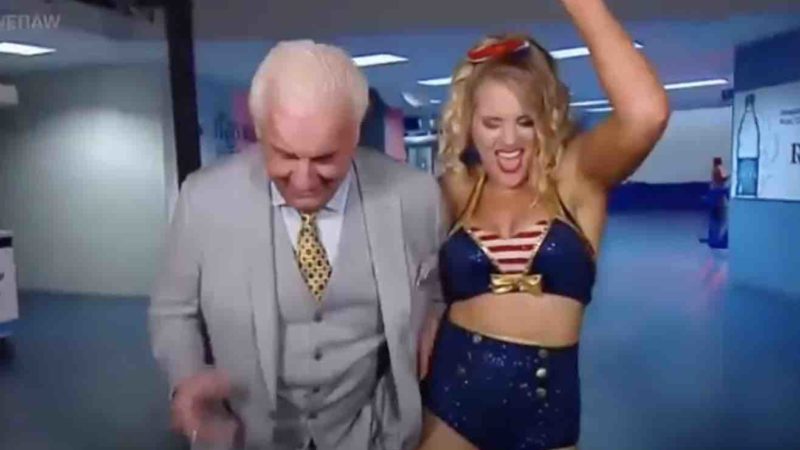 Ric Flair’s regular role on WWE Raw appears to be over, with his departure being written on TV. This could be the beginning of the end for the most sylin’ and profilin’ run in wrestling history.

On the latest episode of RAW, Charlotte Flair scathed her father, Ric Flair, for dancing when Lacey Evans made her pregnancy news public last week. Ric Flair then iterated to his daughter that he never said he was the father of Evans’ baby.

Charlotte was frustrated and then told Ric Flair to go home. Charlotte then said that she works every week to keep the Flair name solid. Heartbreakingly, Charlotte also added that she doesn’t want to just be Ric Flair’s daughter.

The Nature Boy tried to convince Charlotte Flair that all he wants to do is make sure that the Women’s Division is the spotlight. He said he wanted his name to be synonymous with the Raw Women’s Title.

Charlotte Flair then made it clear that she just wanted Flair to leave as the segment came to a close.

Hours later, Ric to Twitter and tweeted the photo from the segment with him and his daughter and captioned: “Okay, I’m Going Home, But I Can’t Promise That I Won’t Be Back! WOOOOO! @MsCharlotteWWE @WWE”

It looks like there’s still something left in Ric Flair. This isn’t the end of The Nature Boy.

Okay, I’m Going Home, But I Can’t Promise That I Won’t Be Back! WOOOOO! @MsCharlotteWWE @WWE pic.twitter.com/3RZyoAvUjE

Dustin is a musician and top writer for Wrestling Edge. You can send an email to wrestlingedge[email protected] to get in touch.