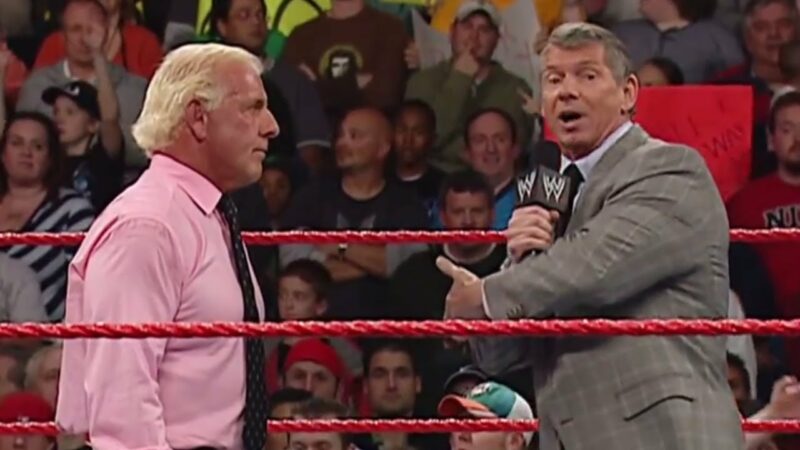 Ric Flair is currently dealing with even more backlash after it was revealed during this past week’s edition of Dark Side of the Ring that damning sexual assault alligations were issued toward him. During that episode of the VICE mini-series, which focused on the infamous ‘Plane Ride From Hell’, it was revealed that a flight attendanant who was on the infamous plane ride stated that Flair allegedly forced himself onto the stewardess. This WWE legend recently ‘apologized’ to Ric Flair’s accuser.

From that, Flair has had his CarShield endorsement suspended as well as an upcoming Comic Con apperance cancelled. Now, during tonight’s edition of WWE Monday Night Raw it was revealed that Flair’s signature ‘Woo’, which was prominent during the television opener across all WWE programming has now been edited out.

In other news regarding Ric Flair, during a recent edition of his podcast, former WWE writer and legendary wrestling manager Jim Cornette addressed the Ric Flair controversy and stated that he did not like how Flair looked during the now infamous Dark Side of the Ring episode. Credit to Ringside News for the following quote.

Chris Jericho recently broke his silence over the Ric Flair controversy. “I hate that (Ric) Flair has come off looking like this because I know the guy. And I genuinely believe he never wanted to hurt anyone or offend anyone or freak anybody out or make anyone feel like that poor flight attendant felt. It was something that he did, that people wanted him to do so long that he never knew when to stop, I guess.

It was wrong and he shouldn’t have done it. It wasn’t the time, it wasn’t the place, and it wasn’t the people. There’s no excuse for it. But I still, just knowing Ric generally believe that down deep in his heart or brain or whatever, he didn’t think that he was offending anyone or doing anything wrong that anybody would remember and be pissed about the next day.”