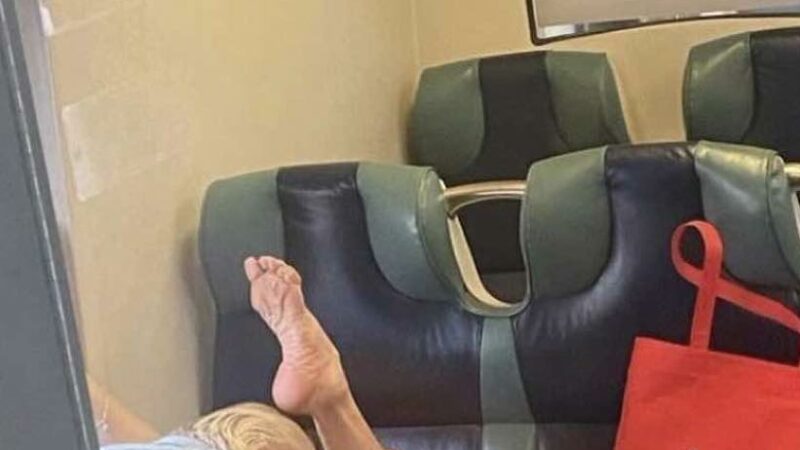 Ric Flair fans have been responding to a viral photo online of an old man having some fun with a woman on a train, with many saying the guy looks like Flair, despite the fact that it’s not him. The Nature Boy is happily married, and he also travels by plane for appearances, but fans are having their fun. Ric Flair has responded to the photo.

Tiger Driver tweeted, “ric flair wildin on his way back from mexico.”

Allen Davis responded, “Those are train seats not airline seats. Not Flair.”

Ric Flair is known to not only be ‘the Dirtiest Player in the Game’ but one of the biggest partiers in the game as well. During a recent edition of 83 Weeks, co-host aind former WCW executive Eric Bischoff told Conrad Thompson how he was stuck paying for a massive bar tab during a dinner that took place at the Swan hotel during a Disney/MGM taping, with fellow WCW talent and New Japan Executives around – a bill that cost Bischoff, thousands of dollars. Wrestling-Edge transcribed Bischoff and Thompson’s remarks. Lacey Evans used a ‘toy’ for Ric Flair in recent video

Bischoff: Did I ever tell you my Orlando story? The bar tab that I had to pick up at a sushi bar?

Bischoff: We’re doing a taping at a Disney MGM studios and it happened to be at one where a lot of the executives from New Japan were as well as the talent that was involved in obviously the television tapings and pay-per-view. We get to one of the Disney/MGM studio tapings and at the property there was a hotel called ‘The Swan’. This hotel happened to have a really cool karaoke bar and a sushi bar that was a really good sushi bar. This wasn’t a rinky-dink strip mall sushi bar, this was a very impressive place in the hotel. So everybody goes over, all of the New Japan executives come over, the talent is there, WCW talent is there, everyone is there and it turns into a very festive event. Drinks are flowing, sushi is flying, everyone is having a great time. Ric Flair was paid huge money for his WWE comeback

Bischoff: [continues] Everybody is having fun, great. The party goes on, everybody goes home. The next morning  I get a phone call – “Mr. Bischoff, I’m the general manager of the Swan Hotel. I have a question for you: We have a credit card here for Ric Flair and let’s just say that it didn’t go through.” I went, really? Can you give me Ric Flair’s phone number? Sure. Well that didn’t work out. Whatever happened on that end didn’t work out.”

Bischoff: [Continues yet again] So I get another call: Mr. Bischoff, we have a little bit of a situation here, we have a five thousand dollar bar tab that needs to get paid. So guess who got to pay that?! That would be Mr. Bischoff because I was running the ship and was being held responsible for a five-thousand dollar Ric Flair bar tab.

Thompson: That was reimbursed right?