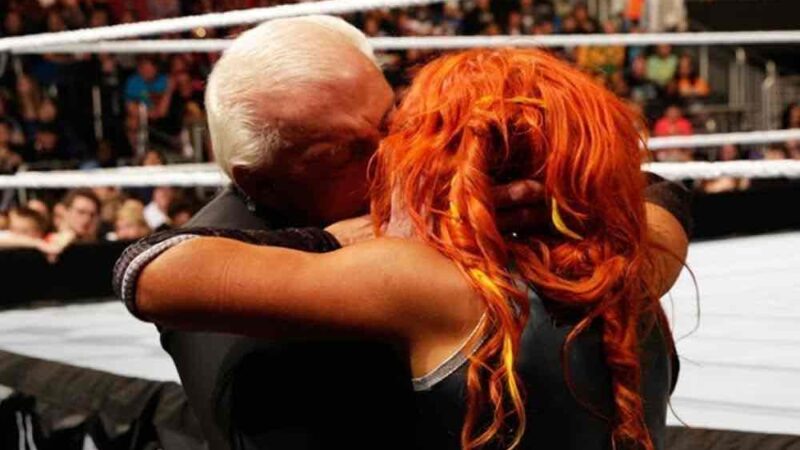 WWE Hall of Famer Ric Flair and WWE star Becky Lynch had been involved in a controversy when the former expressed anger over latter’s gimmick of ‘The Man.’ ‘The Nature Boy’ recently pointed out that other wrestling legends like Shawn Michaels and Bret Hart would have shared the same issues as him if her gimmick drew similarity to theirs.

Flair has had an issue with Lynch’s ‘The Man’ gimmick for quite some time. For years, Ric Flair had the catchphrase, “To be The Man, you gotta beat The Man.” Lynch also addressed herself as ‘The Man’ but later switched to ‘Big Time Becks.’ However, after initially saying he had issues with it, WWE and Flair settled on a deal for the trademark. Flair was the owner of the trademark before the settlement.

During his recent appearance on the To Be The Man podcast, Flair stated that any other wrestling legends like Michaels, Bret Hart, The Undertaker, or Stone Cold would have objected if the gimmick that they developed was given to Becky Lynch.

He also pointed out how much the value of the gimmick was thanks to merchandise sales. He also referred to the difference of opinion between himself and Triple H.

“People ask me all the time what about Hunter and I… Hunter and I, our disagreement, it was about the trademark. But how many guys… this is an opportunity to address this. Do you think if it was Shawn Michaels or Steve [Austin] or Taker or Bret Hart, if they had for example had called Becky [Lynch] like Hitman Becky or Heartbreak Becky, they wouldn’t have been equally as p**sed? We are not just talking about just a name, we are talking about millions of dollars. Millions, as you know. Merchandise in the millions.”

The Nature Boy also talked about how others at that level had worked hard to achieve that level of notoriety.

“But I think people at that level of notoriety that have worked that hard on their brand, they would be as upset as I was.”