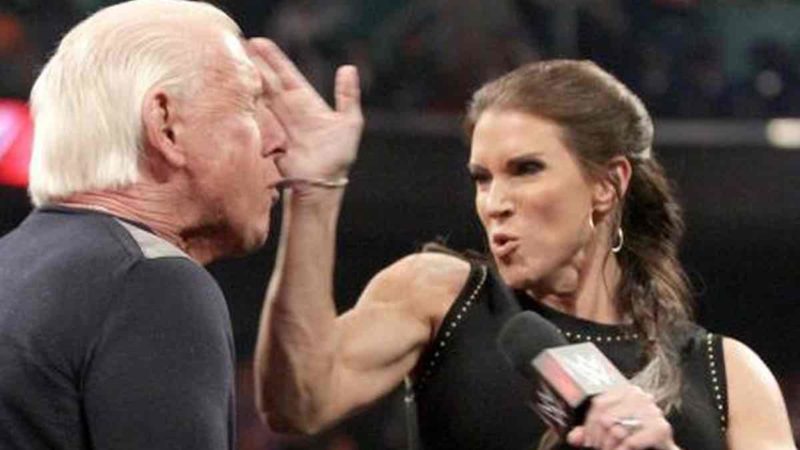 WWE Hall of Famer Ric Flair recently shed light on a fall out he had with his longtime friend Triple H.

‘The Nature Boy’ had a dispute with WWE over ‘The Man’ trademark after the company applied for a trademark for the phrase in 2019. The nickname was used by the former WWE RAW Women’s Champion Becky Lynch after she turned heel on the main roster. The 16-time World Champion believed it was his intellectual property and wasn’t willing to let it go without getting paid for it.

Speaking on his To Be The Man podcast, Ric Flair discussed the status of his relationship with his former Evolution stablemate, Triple H and whether they’re still tight and thick as thieves. He reflected on his friendship with ‘The Game’ as he said:

“Well, I don’t think we’re thick as thieves, but I can tell you this. We had a big falling out over the trademark, ‘The Man’ issue, a big falling out. But, I’d be very surprised if I wasn’t in the top 5 people who reached out to Stephanie [McMahon] when he got sick. Certainly, as soon as I became aware of it, I called her and I called him,” said Flair.

“[Triple H] is the first person I called when [Ric’s son] Reid died. So, for whatever people want to make about our relationship or not, I feel like everybody has ups and downs. You have arguments, you have disagreements. But I can guarantee you this, I will be at his funeral, and I’ll guarantee you this, he will be at mine. Everybody else can say what they want to say, make of it what they want to make of it,” Flair added.

When Becky Lynch returned last year, she started hailing herself as ‘Big Time Becks’ instead of ‘The Man’ However, after this year’s SummerSlam, she teased the return of The Man. We will have to see how Flair reacts to it.